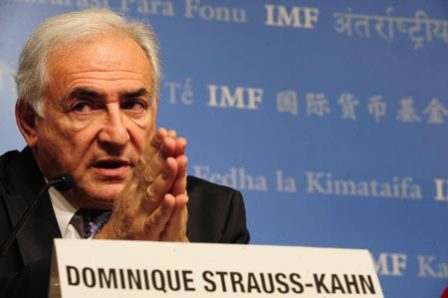 NEW YORK (AP) -- The hotel housekeeper accusing Dominique Strauss-Kahn of sexually assaulting her is telling her story publicly, she says, because she wants the former International Monetary Fund leader behind bars. But it's hard to say whether her striking move will help or hobble her goal.

Nafissatou Diallo's decision to speak out in media interviews is an unusual and risky move for an accuser at this point in a criminal case, legal experts said.

It gives her an empowering chance to tell her side of the story as prosecutors weigh whether to press ahead with the case amid their concerns about her credibility. But it also enshrines a version of events that defense lawyers could mine for discrepancies with her grand jury testimony or use as fodder to argue she was seeking money or public attention.

Whatever the outcome, "it's an extraordinary turn of events, I would say, for her to go on a kind of lobbying, public relations campaign to get this case tried," said Pace Law School professor and former prosecutor Bennett L. Gershman.

After staying silent for nearly two months about an alleged attack that Strauss-Kahn vehemently denies, Diallo gave her account to Newsweek and ABC News.

Adding details and her own voice to the basics authorities have given, Diallo said the former IMF leader grabbed and attacked her "like a crazy man" in his $3,000-a-night Manhattan hotel suite on May 14 as she implored him to stop and feared for her job.

"I push him. I get up. I wanted to scare him. I said, `Look, there is my supervisor right there,'" she told Newsweek in an interview in her lawyer's office. But Strauss-Kahn said no one was there to hear, she said, and he went on to yank up her uniform dress, tear down her pantyhose, forcefully grab her crotch and then grip her head and force her to perform oral sex.

Strauss-Kahn's lawyers on Monday called the interviews "a desperate distraction from the key fact that Ms. Diallo has had to admit to misleading" prosecutors.

The interviews come with the case against Strauss-Kahn in limbo after Manhattan prosecutors raised doubts about the housekeeper's overall credibility. They said on July 1 that she had lied about her life story and gave inconsistent descriptions about what she did right after the alleged attack.

The disclosures prompted her lawyer, Kenneth Thompson, to criticize the district attorney, press prosecutors to keep going with the case and even call for a special prosecutor to take over.

Diallo told her interviewers she wants Strauss-Kahn held accountable, and she was going public to tell a story she said had never wavered, to counter misleading portrayals of her and to address doubts about her trustworthiness.

"I was watching the news and they said he's going to be the next president of France," she said. "I said, `Oh, my God.' I was crying. `They're going to kill me. I'm going to die.'"

Before Sunday, the 32-year-old Guinean immigrant's name had been reported by some French media outlets but not by major U.S. media, which generally protect the identities of people who say they've been sexually assaulted.

"I never want to be in public, but I have no choice," she said, according to ABC News. "God is my witness I'm telling the truth."

But against the backdrop of uncertainty about her believability and motives, the interviews may raise as many questions as they answer, legal observers said.

"On the one hand, there's an upside that perhaps it will encourage the prosecutors to move forward with their case. On the other hand, there's the risk that whatever she says can be used against her in a civil or criminal case, especially with respect to any inconsistencies," said Sanford Rubenstein, a New York lawyer who has represented victims in noted cases - and advised them not to give interviews while the case was ongoing, he said. His clients have included Abner Louima, a Haitian immigrant who was tortured in a New York City police station bathroom in 1997.

Prosecutors generally discourage potential witnesses in criminal cases from speaking outside court while a case is pending, partly to avoid creating multiple accounts that could diverge, even slightly. In a trial, such gaps can become thin edges of a wedge for adversaries to drive doubts about an accuser's veracity into jurors' minds.

"The more that's out there, the more you're susceptible on cross-examination," said Elizabeth Crotty, a defense lawyer and former Manhattan assistant district attorney.

The housekeeper's interviews also could provide an avenue for Strauss-Kahn's lawyers to suggest she was out for publicity or cash, a notion that already has shadowed the case. A day after Strauss-Kahn's arrest, she was recorded alluding to his wealth on a phone call with an incarcerated friend, a law enforcement official has said.

Newsweek said she had not ruled out trying to make some money from her situation, a suggestion that a civil lawsuit could be forthcoming, though she told the magazine, "I don't think about money."

The interviews nonetheless could tempt prosecutors to bow out rather than go forward with the case because "she's already trying it in the court of public opinion," Gershman said.

The DA's office has said its investigation, not external factors, will determine the outcome. Communications chief Erin Duggan said Sunday the investigation was continuing and declined to discuss the case further.

In the interviews, Diallo addresses some of the inconsistencies that already have rocked the case.

She testified to a grand jury that after the alleged attack, she cowered in a hallway and watched Strauss-Kahn leave, then told a supervisor. Prosecutors said earlier this month that she later told them she actually had gone on cleaning rooms before consulting her boss. Diallo told Newsweek she was disoriented and went into the rooms briefly before a supervisor appeared and asked why she was upset, but the maid denied changing her account.

Diallo also lied about her background, including by telling prosecutors an emotional story of being gang-raped in her homeland, they said. She told Newsweek she was raped by two soldiers but acknowledged she had embellished her life story on her 2003 asylum application; prosecutors have said she told them she repeated the lies to them to be consistent.

Strauss-Kahn lawyers Benjamin Brafman and William W. Taylor III rapped Diallo for conducting what they portrayed as a media campaign to pressure prosecutors to pursue Strauss-Kahn as she perhaps plans to sue him. They have said whatever happened in the suite wasn't forced, and they are pressing for the case to be dismissed.

"Nothing can camouflage the lies and misstatements that Ms. Diallo has consistently put forward against an innocent person to law enforcement, friends, medical professionals and members of the media," they said in a statement Monday.

Thompson fired off a statement of his own Sunday, saying Strauss-Kahn's lawyers "have conducted an unprecedented smear campaign against the victim of a violent sexual attack."

The American Bar Association's professional conduct rules tell lawyers not to make public statements out of court that are likely to prejudice the case. But the rules don't apply to their clients and in a heavily covered case like Strauss-Kahn's, it's questionable how much any lawyer's remark "will affect the jury when there's so much publicity already out there," said Ellen Yaroshevsky, a legal ethicist at Yeshiva University's Benjamin N. Cardozo School of Law.

Jennifer Peltz can be reached at http://twitter.com/jennpeltz