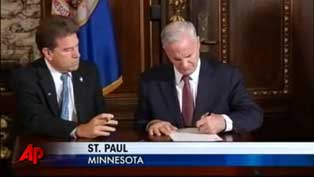 Dayton's signature came just hours after lawmakers gave their own approval to the deal after meeting in special session that started Tuesday afternoon and lasted until early Wednesday morning. All sides formalized an agreement that Dayton struck with leading Republicans late last week.

The two sides argued bitterly over taxes and spending for months. When government shut down July 1, it closed state parks and rest stops, laid off 22,000 state employees, stopped road projects and much more.

The end to the shutdown began when Dayton moved last week to accept a borrowing plan offered by the GOP shortly before the stoppage began.

After signing the budget, Dayton said he was "not entirely happy" with it.

"It's not what I wanted, but it's the best option that was available and would be for any time," he said. Dayton said the budget "gets Minnesota back to work."

Details were still emerging Wednesday about how quickly state operations would restart. Dayton said he expected most state employees to be back on the job Thursday.

Jim Schowalter, the state's budget commissioner, said it will take longer to restart some state agencies than others since some have continued partial operations during the shutdown. He predicted it would take weeks for agencies to work through paperwork backlogs, clean up parks and other sites and return to normal operations.

The state lost millions of dollars in the shutdown, including lost revenue from lottery sales, tax audits and state park fees, money spent preparing to shut down and the cost of unemployment and health benefits for laid-off workers. The full cost wasn't expected to be known for some time because the workers who could calculate it weren't on the job.

The budget was widely panned for setting up a new problem down the road. It borrows money from schools and from future payments on a legal settlement with tobacco companies to erase a $5 billion deficit through mid-2013. Republicans and Democrats have been at odds for years over how to address persistent deficits, with GOP leaders pushing for deeper spending cuts and Democrats arguing for new taxes.

Minnesota became a national example of political dysfunction, mirroring in miniature the partisan standoff in Washington over raising the debt ceiling. State leaders are more accustomed to being recognized for efficiency and innovation.

The end of the shutdown was a relief to Kim Leonhardt, owner of High Banks Resort on Lake Winnibigoshish in northern Minnesota. When the state stopped issuing fishing licenses during the shutdown, she had to talk at least a dozen parties out of canceling. The resort wound up promising guests it would cover the costs of any tickets for fishing without a license.

Then Leonhardt found that the state-issued card that allows the resort to buy beer and liquor was about to expire, sending her into a panic and scrambling to stock up for a marathon shutdown. Despite all that, Leonardt said she didn't blame one side more than the other.

"I guess I'm staying neutral on that. I'm glad to see that things are coming back on track," she said.