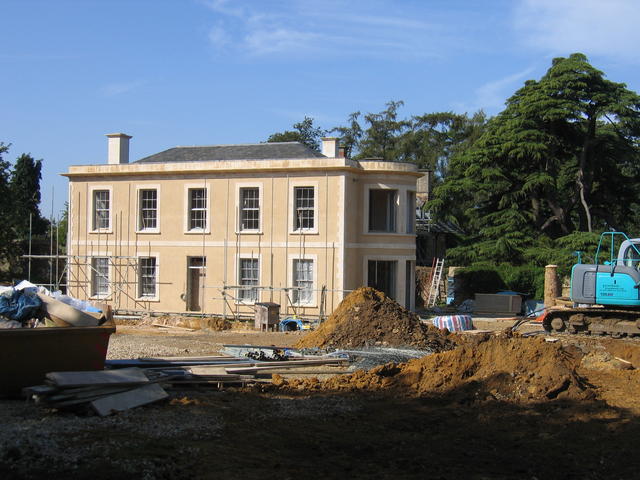 The Commerce Department said Tuesday that builders began work on a seasonally adjusted 629,000 homes last month, a 14.6 percent increase from May.

Still, that's roughly half the 1.2 million homes per year that economists say must be built to sustain a healthy housing market. Jennifer Lee, a senior economist at BMO Capital Markets, called the gains "just a blip in the overall flat-lining trend of homebuilding activity."

"We have to see a rebound in job creation to sustain a recovery in housing," she said.

Much of the increase in June came from a surge in apartment construction, a volatile part of the industry. That sector jumped more than 30 percent last month.

Renting has become a preferred option for many Americans who lost their jobs during the recession and were forced to leave their rapidly depreciating homes. Since 1992, apartments have typically made up just 20 percent of home construction. Now, they make up closer to 30 percent of the market.

Single-family home construction rose 9.4 percent. It was the biggest increase since June 2009, when the recession officially ended. But analysts said the pace of 453,000 homes per year was still too depressed to signal a turnaround.

Home construction rose in every part of the country. The biggest gains in single-family home construction were in the Midwest and South, which saw extensive damage from tornadoes and flooding this spring. In the Northeast, the overall building pace spiked 35.1 percent and in the Midwest, it rose 25.3 percent. In the South, it rose 10.6 percent and in the West, it increased 5.4 percent.

Though new homes represent just 20 percent of the overall home market, they have an outsize impact on the economy. Each home built creates an average of three jobs for a year and generates about $90,000 in taxes, according to the National Association of Home Builders.

The weak housing industry is also holding back the U.S. economy. In past modern-day recessions, housing accounted for 15 to 20 percent of overall economic growth. This time around, between 2009 and 2010, housing contributed just 4 percent to the gross domestic product.

Cash-strapped builders are struggling to compete with deeply discounted foreclosures and short sales. A short sale is when lenders allow borrowers to sell their homes for less than what is owed on the mortgage.

One reason is that previously occupied homes are a better deal than new homes. The median price of a new home is more than 30 percent higher than the median prices for a re-sale. That's more than twice the markup in healthy housing markets.

Loans are also harder to get. Most private lenders are requiring 20 percent down payments and higher credit scores for the lowest mortgage rates.

In the past month, President Barack Obama said the housing market has "been most stubborn to us trying to solve the problem." And last week Federal Reserve Chairman Ben Bernanke said the troubles facing home construction and sales were more persistent than previously thought.

The builders' trade group said Monday that its survey of industry sentiment rose to 15 in June. Any reading below 50 indicates negative sentiment about the housing market. The index hasn't reached 50 since April 2006, the peak of the housing boom.