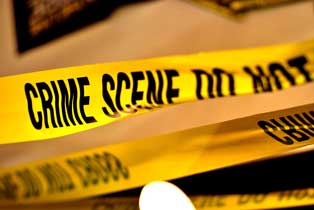 BAKERSFIELD, Calif.— Life in Bakersfield after a brief NFL stint had not been kind to running back David Lee "Deacon" Turner.

After at least two dozen run-ins with the law, Turner, 56, was shot and killed in front of a convenience store Sunday by a Kern County deputy after he allegedly hit an officer with a bag holding two cans of beer.

"He was a marvelous kid," Bakersfield College coach Gerry Collins told The Bakersfield Californian. Turner had played with the Cincinnati Bengals.

As a student-athlete, Turner thrived, shredding defenses at Shafter High School, Bakersfield College and San Diego State University. But as an adult, after playing in the NFL from 1978 to 1980, he had trouble finding his place in civilian life.

Court records show an arrest history stretching back to 1986 for the former running back and kick return specialist. The most recent, on June 17, was for driving while his license was revoked because of a conviction for driving under the influence.

On Sunday, deputies were investigating reports of teenagers asking adults to buy alcohol and cigarettes. The deputies approached Turner as he left the store with his 19-year-old son and a 16-year-old juvenile whom authorities have not identified.

The deputies detained Turner while they investigated. According to reports from the sheriff's office, Turner initially complied with deputies but then decided to leave.

Deputies said a scuffle occurred when they tried to stop Turner. Deputy Aaron Nadal was hit on the back of the head with a bag holding two, 24-ounce cans of beer before Deputy Wesley Kraft drew his handgun and fired twice at Turner, authorities said.

Friends and family told the newspaper they have trouble believing authorities' account of the story. Coach Collins said, "The deputy must have provoked him." Nephew Kevin Turner called his uncle "the backbone of our family."

Sheriff Donny Youngblood said department investigators were getting tapes from video cameras at the store to see if the incident was recorded. He said the investigation won't be quick, and he will review the results. He said he has purposely not researched Turner's criminal background.

"I want to look at it with an open and objective mind," Youngblood said. "Having a record is a tiny piece of the puzzle, but not a significant piece."

He declined to comment about the investigation directly. The department issued a release saying Nadal was treated and released at a hospital. Officials have not described the nature of his injury.

Kraft is on administrative leave while sheriff's detectives investigate the shooting.

"Pound for pound he was as strong as anyone on the time," former teammate and radio analyst Dave Lapham told Cincinnati.com.