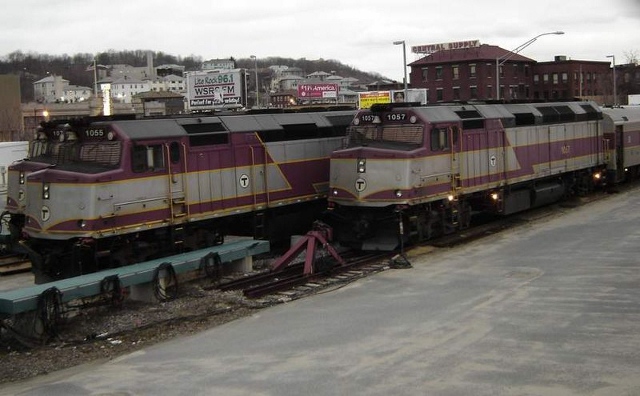 BOSTON (AP) -- On a chilly evening in February, a commuter train bound for Worcester, Mass., broke down outside Boston, transforming passengers' usual 80-minute commute into a four-hour nightmare.

The train's failure was among the winter lowlights for the Boston-area commuter rail system's fleet of 80 aging locomotives which, among other woes, have had trouble starting, keeping auxiliary power functioning for lighting systems and maintaining enough air pressure for braking systems, according to transit officials.

"I can't rely on it at all," said Frank Summers, who has been commuting to Boston from suburban Ashland for about seven years and believes service is declining. "It's always jammed-packed and rarely on time."

The commuter trains are run by a firm under a contract with the Massachusetts Bay Transportation Authority, known in Boston as the T. The T's equipment woes are hardly uncommon for big-city systems, and its financial struggles are shared by almost every transit system in the U.S., big and small.

The Great Recession and cuts in government subsidies have wreaked havoc on mass transit in America, even as rising gasoline prices have pushed up demand for reliable service. By one survey, more than 80 percent of U.S. transit systems had cut service, raised fares or both since the economic downturn started.

Cash-strapped and debt-ridden systems have put off new equipment purchases and other upgrades as they struggle to maintain daily operations. The Federal Transit Administration has pointed to tens of billions of dollars in deferred maintenance, a problem particularly acute for older urban systems.

William Millar, president of the Association of Public Transportation Agencies, said there are signs of financial improvement, but it's not enough to make up for the needs.

"We still have a significant majority of systems that are still running unfunded deficits, that are still going to have to consider further fare increases and further service cuts, though they certainly don't want to do those things," he said.

Especially when ridership is growing. In Boston, for example, May was the busiest month on record for the subway system and overall ridership is up more than 5 percent from a year ago. In an attempt to keep pace, the T bought two new commuter rail locomotives this year - the first new ones in 20 years - and is pledging to continue efforts to modernize the line, which includes the nation's oldest subway system.

"Almost universally, across the political spectrum, people are saying rising gas prices are making them nervous, that they really want to have more and better transit options," said David Goldberg, communications director for Transportation of America, a coalition representing the interests of transit users.

More riders represent a mixed bag for operators. Fare revenue goes up, of course, but the gains can easily be offset by the higher fuel costs that systems must incur.

An influx of riders also might generate greater political support for mass transit, but the added strain on aging and overtaxed equipment could frustrate commuters and leave them ready to return to their cars when gas prices ease.

The report found that 35 percent of all rail assets of those agencies were in subpar condition. Another 35 percent were deemed adequate and only 30 percent were in good or excellent condition. Upgrades would cost the seven largest systems $50 billion, the agency estimated.

Add in the rest of the country's public transit systems, and the maintenance backlog mushrooms to $78 billion.

Millar's group surveyed its 1,500 agencies and found that at least 40 percent were delaying capital improvements.

It's not just the major systems that are being forced to scrimp.

The Transit Authority of River City, which provides bus service for five counties in the greater Louisville, Ky., region, laid off 42 operators and mechanics last year and 10 administrative employees the previous year.

The authority's executive director, J. Barry Barker, said the system also was forced to reduce service and raise fares by $1 to $2.50 for express buses. Preventing further cuts or steeper fare hikes has meant sacrificing some improvements.

"The feds have a guideline that you can replace a full-size, 40-foot bus every 12 years. Basically I don't know anybody in the business who is replacing them after 12 years, and it's typically 14-16 (years)," he said.

Over the last several years, the authority has purchased only about half the replacement buses needed to meet even the longer cycle.

Federal support for mass transit comes largely in the form of the gasoline tax, with 2.86 cents per gallon of the federal tax earmarked for transit. But revenue has been declining as fewer Americans drive and many who do have switched to more fuel-efficient vehicles.

Transit systems in larger cities can apply it only toward capital improvements, while systems in areas with populations of 200,000 or less can use federal money to pay operating expenses. Federal stimulus money, now ending, provided a short-term boost with 1,072 grants worth $8.8 billion for special transit projects. That included the purchase of new buses and rail cars, according to the Federal Transit Administration.

Going to the ballot box has become a popular tool for systems trying to raise revenue, and voters have generally seemed receptive.

In 2010, voters nationwide approved 73 percent of transportation-related ballot questions, many calling for increases in sales or property taxes.

St. Joseph, Mo., boasts of having one the nation's oldest public transit systems, dating to when horses pulled large coaches before the Civil War. But with revenue falling and costs increasing for fuel, health insurance and liability coverage, the system had to go to local voters for a one-quarter cent sales tax increase in 2008 to avoid shutting down some of its eight bus routes.

But it may be only a temporary patch.

"We raised our sales tax, but the people haven't been buying as much stuff. It's not producing the revenue we would have hoped," said Andrew Clements, assistant director for St. Joseph public works. "As the future looms, eight to 10 years from now, we may be looking at a much harder challenge."

The public transit system serving Grand Rapids, Mich., won voter approval of property tax measures in 2000, 2003 and 2007 - allowing it to expand from 63 buses in 1999 to 105 buses this year at peak hours and more than double its ridership, said Peter Varga, chief executive officer of The Rapid.

The agency hasn't run a deficit in a decade, nor has it increased fares or cut service, he said, even as Michigan's economy has tanked.

To help close a projected $127 million operating deficit, the Boston-area system adopted a plan to sell bonds secured by future parking revenue at nearly 100 lots and garages. Proceeds from the bond would also be used to pay off future debt. The agency also hoped to sell more advertising space at stations and on trains and buses, and move its unionized employees to a more flexible state-run health insurance plan.

Passengers no longer will get a free ride if their bus or train is more than a half-hour late, but fare hikes, for now at least, are off the table.

Historically, fares have accounted for 30 percent to 40 percent of total transit revenue nationwide.

Experts who point to more modern and reliable systems around the world say U.S. cities must find ways to overcome financial hurdles and invest in public transit.

In Los Angeles, voters agreed in 2008 to pay a half-cent sales tax over the next 30 years to fund a massive expansion of public transportation. But Mayor Antonio Villaraigosa doesn't want to wait that long for the projects to be completed, so he's proposed borrowing billions from the federal government so the work can be done in just a decade.

"It's becoming clear that (cities) have to remain healthy and vital, and it's also becoming increasingly clear that a functioning transit system is a big part of that," said Robert Puentes, a transportation expert with the Brookings Institution.