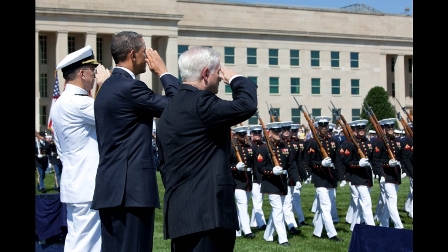 Chairman of the Joint Chiefs of Staff Admiral Mike Mullen, President Barack Obama, and Secretary of Defense Robert M. Gates salute as troops parade past the reviewing stand during the Armed Forces Farewell Tribute in honor of Secretary Gates at the Pentagon in Arlington, Va., June 30. (Official White House Photo by Pete Souza)

WASHINGTON (AP) -- The United States will push ahead with more targeted drone strikes and special operations raids and fewer costly land battles like Iraq and Afghanistan in the continuing war against al-Qaida, according to a new national counterterrorism strategy unveiled Wednesday.

The doctrine, two years in the making, comes in the wake of the successful special operations raid that killed al-Qaida chief Osama bin Laden in May, and a week after President Barack Obama's announcement that U.S. troops will begin leaving Afghanistan this summer.

The document is a purposeful departure from the Bush administration's global war on terror. The worldwide hunt for terrorists that began after the Sept. 11, 2001, attacks focused first on Afghanistan, and small numbers of al-Qaida are still active there.

White House counterterrorism chief John Brennan said the reworked doctrine acknowledges the growing threat of terrorism at home, including al-Qaida attempts to recruit and attack inside the United States.

Brennan told a Washington audience Wednesday that more resources would be spent on the fight at home to spot would-be militants and their recruiters, and the U.S. would resist al-Qaida's attempts to bleed it economically by drawing it into costly invasions overseas.

"Our best offense won't always be deploying large armies abroad, but delivering targeted, surgical pressure to the groups that threaten us," Brennan said at the Johns Hopkins School of Advanced International Studies.

Brennan said the strategy relies on "surgical" action against specific groups to decapitate their leadership and deny them safe havens and rejects costly wars like Iraq and Afghanistan that feed al-Qaida's narrative that America is out to occupy the Muslim world. He said the U.S. would work whenever possible to help host countries fight al-Qaida so the U.S. didn't have to, just as it was currently trying to hand over responsibility to the Afghans.

The operations Brennan describes are almost solely the province of the intelligence and military special operations agencies, especially the CIA and elite forces of the Joint Special Operations Command that worked together to carry out the bin Laden raid, but also including the special operations trainers that work with host nations' militaries.

Brennan, who is a former CIA officer, did not make specific mention of the covert armed drone program that targets militants in Pakistan and, on rare occasions, in countries like Yemen. But he referred to the administration's work to rush what he called "unique capabilities" to the field, an oblique reference to classified programs like the stepped-up construction of a CIA drone-launching base in the Persian Gulf region to use the unmanned aircraft to hunt militants in Yemen.

Bush White House veteran Juan Zarate questioned the wisdom of singling out al-Qaida as the main American enemy, "inadvertently aggrandizing them when they are in decline, by making them the focus of the strategy."

He also questioned the decision to "focus very mechanically on al-Qaida," with less emphasis on the violent Islamic ideology that drives the group. "You might miss a movement that is developing or ... evolving into a global platform" like al-Qaida, said Zarate, former White House deputy national security adviser for combating terrorism.

Zarate also said out that although the Obama administration may be dropping the world "global" from the war on terror, it still seems to be targeting terror cells on almost every continent.

Retired Brig. Gen. Russ Howard, who was credited with helping inspire the Bush administration's pre-emptive strike doctrine, said the message the strategy sends to allies is that the U.S. does not want to be involved if the going gets too expensive, as in Iraq or Afghanistan.

"Nations will question whether U.S. will be a reliable ally because we've just said we won't get involved with anything new, and we won't stay" where we already are, said Howard, founding director of the Combating Terrorism Center at the U.S. Military Academy.

In another apparent swipe at the Bush administration, Brennan said his White House was using every "lawful tool and authority available" in the fight against terrorists, describing Obama's rejection of the Bush White House's interrogation of terror suspects by methods such as waterboarding.

"The United States of America does not torture," Brennan said, "and it's why he (Obama) banned the use of enhanced interrogation techniques, which did not work. "

Brennan repeated the administration's mantra that it wants to "safely" close the U.S. detention facility at Guantanamo Bay, Cuba, after either prosecuting terror suspects in the U.S. or by military commissions, or by releasing them to their home nations.