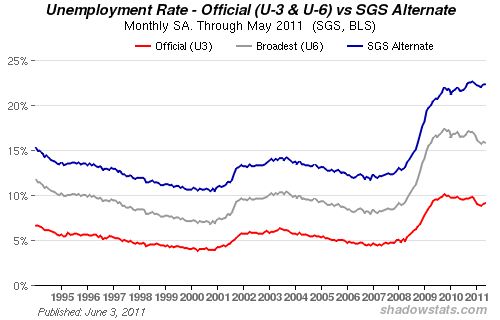 Applications have topped 400,000 for 12 straight weeks. Applications had fallen in February to 375,000, a level that signals sustainable job growth. They stayed below 400,000 for seven of nine weeks. But applications then surged to an eight-month high of 478,000 in April and have shown only modest improvement since that time.

The four-week average, a less volatile measure, has been stuck at about 426,000 for a month.

"Another disappointing report," Jennifer Lee, an economist at BMO Capital Markets, wrote in a note to clients. "This report does nothing to reassure anyone that the job environment is improving."

Elevated unemployment benefit applications had little impact on Wall Street. Stock rose sharply Thursday as passage of a bill that will give Greece access to rescue cash looked imminent.

Many economists say temporary factors prompted companies to pull back on hiring this spring. High gas prices have cut into consumer spending. And a parts shortage stemming from the March 11 earthquake in Japan slowed U.S. manufacturing, particularly in the auto industry.

Employers added only 54,000 net new jobs in May, much slower than the average gain of 220,000 per month in the previous three months. The unemployment rate rose to 9.1 percent.

The economy needs to generate at least 125,000 jobs per month just to keep up with population growth. And at least twice that many jobs are needed to bring down the unemployment rate.

Gas prices have fallen steadily in the past two months since peaking in early May at an average of nearly $4 a gallon. On Thursday the national average was $3.54 per gallon, according to AAA. And economists predict the impact of the parts shortage should begin to fade this summer.

Still, the U.S. economy isn't growing quickly enough to generate that many jobs. The government said last week that the economy grew only 1.9 percent in the January-March quarter. Most analysts expect the economy is growing at about the same weak rate in the April-June period, which ends Thursday.

The economy typically needs to grow at 5 percent for a year to reduce the unemployment rate by one percentage point.

The International Monetary Fund on Wednesday became the latest institution to forecast weak growth for the U.S. economy this year and next. The lending organization said it expects growth of 2.5 percent this year and 2.75 percent in 2012.

Unemployment will still average 8.4 percent in 2012, the IMF predicted in its annual report on the U.S. economy.

Last week, the Federal Reserve acknowledged that the economy has slowed in recent months. Fed officials said that "recent labor market indicators have been weaker than anticipated."

The central bank reduced its forecast for employment and growth this year. It projects that unemployment at the end of 2011 will be 8.6 percent to 8.9 percent. That's worse than a Fed forecast two months ago, which put the unemployment rate at 8.4 percent to 8.7 percent.

The number of people receiving unemployment benefits fell 12,000 to 3.7 million, the fewest in about two months. But that doesn't include millions of additional laid-off workers who are receiving extended benefits under emergency programs put in place during the recession. All told, about 7.5 million people received unemployment benefits in the week of June 11, the latest data available.