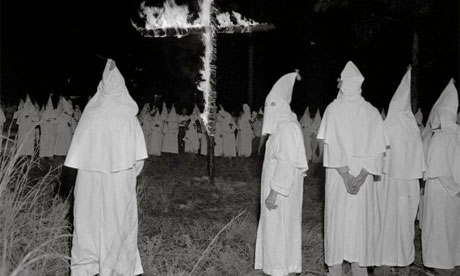 Ku Klux Klansmen in Louisiana in 1962

For decades, Rosa Morris Williams has prayed to live long enough to see justice for her grandfather, who died after being burned in his shoe shop in a 1964 attack believed to have been carried out by the Ku Klux Klan.

Williams said her hopes were lifted when she learned earlier this year that a grand jury had been convened in the case of Frank Morris, who was inside his store in Ferriday, La., when it was torched on Dec. 10, 1964.

The grand jury has met off and on since February, according to people with knowledge of the case. But those proceedings are secret, and it's not clear who has been subpoenaed to testify. The grand jury meetings are no guarantee someone will be indicted, and the FBI says it does not publicly name suspects until an indictment is issued.

Dane Ciolino, a law professor at Loyola University in New Orleans, said grand juries can be used in different ways. In some cases, prosecutors have identified a possible suspect and want to seek an indictment. But they could also be using the subpoena power of the grand jury to coax people into telling what they know, Ciolino said. And in decades-old cases like Morris', prosecutors may simply want elderly witnesses to tell their stories before they die.

FBI officials and Concordia Parish District Attorney Brad Burget said that the law would not allow them to confirm or deny that a grand jury is meeting. However, Burget, the Justice Department and the FBI say the investigation is ongoing, with federal authorities taking the lead in the probe. The officials would not discuss details of the investigation.

"The case needs to be solved," Burget said. "Whether it ends in solving the crime or it ends in a prosecution, the important thing is solving it and giving closure to the family."

The FBI has reopened 111 cases in recent years as part of an initiative to examine unsolved crimes from the civil rights era, said Supervisory Special Agent Jeffrey Heinze, who is in charge of the initiative. Last year, the Justice Department said in a report to Congress that 109 cases had been reopened at that time and that 56 of those had been closed. A new report is expected this year, and those numbers will change.

Heinze knows most of the cases won't lead to a prosecution because some suspects were tried and acquitted decades ago and cannot be tried twice for the same crime, and many suspects and witnesses are dead. When the Justice Department closes a case, it sends a letter to victims' relatives outlining what the agency believes happened.

"Our ultimate goal would be prosecution, that's what we're shooting for in every single case, but we understand that due to the passage of time that is not going to be the case in a lot of these investigations," Heinze said. "We try to give the families some type of closure."

For Williams and others who have followed the investigation, the Morris case seemed to gain traction last year when the local newspaper, the Concordia Sentinel, published an article quoting three people as saying a man named Leonard Spencer from Rayville, La., told them years ago that he was involved in the arson death of a shopkeeper.

In an interview with The Associated Press earlier this year, Spencer denied having anything to do with the Morris killing. He acknowledged being a KKK member in the 1960s, but he described it as a youthful mistake and said he never killed anybody.

Spencer said he cooperated with the FBI when he was questioned last year because he has nothing to hide. Spencer said his ex-wife, Brenda Rhodes, their son, William "Boo" Spencer, and Leonard Spencer's ex-brother-in-law, Bill Frasier, all lied when they claimed he told them he was involved in Morris' death. Spencer said they are mad at him for leaving the family and are making up stories to hurt him. He has not returned several phone calls from the AP since that interview.

The FBI has said the agency is aware of the allegations against Spencer, but that allegations alone are not proof.

Frasier, a former Concordia Parish sheriff's deputy, said prosecutors have not called him or the other accusers to testify before the grand jury. Rhodes refused to discuss the matter. Boo Spencer could not immediately be reached.

"I don't who they'd be interviewing, they sure ain't interviewing us," Frasier said. "I think the feds have drug their feet on this ever since it got started."

Williams also said she was puzzled that Frasier hadn't been questioned by the grand jury about her grandfather's death.

"You would think those would be the first ones they call," she said.

Frasier has said Spencer told him decades ago that he was part of a Klan group that burned a store when nobody was supposed to be inside. However, Frasier said Spencer didn't name Morris as the victim and insisted he stayed in the car.

The reason for the attack on Morris' store is unclear. Speculation ranges from Morris' interaction with white customers to refusing to do free repairs for a corrupt sheriff's deputy.

While the motive may be a mystery, FBI documents from that era paint a gruesome picture. Morris, who was asleep inside the store, was awakened about 2 a.m. when he heard a window break.

Two men were outside. One held a shotgun and forced Morris to stay inside. The other tossed a match onto some flammable liquid they'd poured inside.

Morris was engulfed in flames and ran out the back door. Two police officers took him to a hospital. Detectives interviewed Morris in his hospital bed, but he did not positively identify his attackers. He died four days after the fire.