Special to the NNPA from the Charlotte Post
Published: 02 July 2011 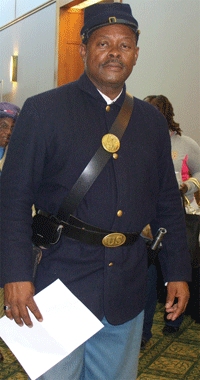 A member of the N.C. African American Heritage Commission and New Bern Historical Society, George travels the country on a mission of education by re-enacting the role Black warriors played in the conflict between the United States and Confederate States.

"We are always the most photographed group at re-enactments; it's such a well-hidden story of U.S. Colored Troops and sailors during the Civil War," he said.

Re-enactors can give a reality to history that the written word can't, said Jeffrey Crow, deputy secretary of the N.C. Department of Cultural Resources and co-author of "A History of African Americans in North Carolina."

"The immediacy of another living person representing an earlier time allows people to connect in a way that they can't with books.  That is even truer when the recorded history is limited or misunderstood."

George re-enacts as a member of the N.C. Colored Volunteers, a group recruited in New Bern and part of the First African Brigade. When he's not re-enacting, George is a New Bern city planner, historian, and community volunteer.  As a member of the AAHC, he helps ensure that African-American history and culture are appreciated.

"My grandfather told me when I was a young boy that his grandfather was a soldier.  His grandfather fought for the Union," George said.  "I was concerned that this was contradictory to what I had learned in history.  But when I went off to college, I learned there was a cornucopia of experiences of African- Americans during the Civil War."

Through oral history from his grandfather and father, George learned that his family was free and had come from the Tidewater Virginia area to New Bern about 300 years ago.  Documents from the 1700s at the Craven County courthouse further substantiate this history, along with family records.  He notes that free Blacks in N.C. were the thesis subject for eminent historian John Hope Franklin.

As a re-enactor, George finds many adults do not know the story of Blacks fighting for their freedom in the war and during Reconstruction.  He said African-Americans are particularly drawn, because most Civil War re-enactors are usually white.

"It is important to talk with and re-educate people," George said.  "As more historical research and study is done, we are shifting the paradigm and a more complete truth of American history will be known."