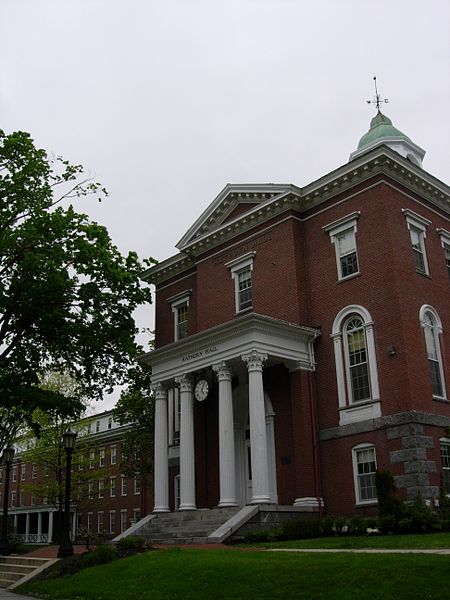 Hathorn Hall on the campus of Bates College in Lewiston, Maine

Looking for a college bargain? Try any of nine University of Puerto Rico campuses, where annual tuition hovers at or below $2,000.

Counting pennies? Avoid Bates College in Lewiston, Maine, a private school where tuition, fees and room and board exceeds $50,000, making it one of the five most expensive schools on a new U.S. Department of Education guide to college costs.

The federal agency released its College Affordability and Transparency lists on Thursday to fulfill a reporting requirement passed into law in 2008. The online lists track tuition costs among the top and bottom 5 percent of four-year and two-year schools. The measures include public, private and for-profit colleges and universities.

Separate lists show the most and least affordable schools when scholarships and other financial factors are considered. The Education Department says those "sticker prices" better reflect out-of-pocket attendance costs. Two other lists track the rate of tuition increases as well as the rate of increase in the average net price. And career college users interested in a specific track can search by their area of interest, such as cosmetology or automotive repair.

"Given the energy and commitment that families make to the process ... this information is very useful," said David Bergeron, the Education Department's deputy assistant secretary for policy, planning and innovation.

Education officials also acknowledged the data's limitations. For instance, the attendance costs that elevated Bates and four other East Coast liberal arts schools to the top of the private school heap include fees other than tuition that their peer institutions calculate separately.

And while the new lists highlight schools at the very top and bottom, they don't account for the other 90 percent of institutions - though individual costs and other details can still be found using links on the department's College Navigator website.

"This is really a tool that allows students and families to see the highs and lows," Bergeron said. "You really don't see the large middle."

Among four-year public schools, the University of Texas Health Sciences Center at San Antonio ranks at the top for highest net price, with annual costs of $24,192 in 2008-09. The University of Guam is second-highest, $290 below the Texas medical school.

Sitting Bull College in North Dakota, which has campuses in Fort Yates and McLaughlin, tops the list of most affordable four-year schools, with a net price of just $938. That's compared to a national average of $10,747.

On tuition costs alone, Haskell Indian Nations University in Lawrence, Kan., tops the list of four-year public schools, charging just $430 a year, compared to the national average of $6,397. That data comes from the 2009-10 school year, one year more current than the net price data.

But both of those schools are tribal colleges where attendance is generally limited to those of Native American ancestry - a caveat not readily found on the Department of Education site.

The new reporting standard requires schools with the highest costs or largest increases to justify the reasons behind the rising costs, and offer plans to address the increases. The specific reporting requirements are still being developed.

Some schools anticipated the data's release and offered their own explanations.

At Sewanee: The University of the South, a small private school in Sewanee, Tenn., the 2010-11 tuition costs of just below $36,000 kept the school out of the list of the top 5 percent most expensive. But Sewanee used Thursday's announcement to tout its plans to reduce tuition and fees by 10 percent next year - and to hail the effort to provide consumers with more accurate information about college costs.

"The economic climate has changed in recent years, and higher education's approach to how families pay for their children's educations must change with it," Sewanee vice chancellor John McCardell Jr. said in a written statement. "For years, private higher education has operated on a model of having high tuitions and high discounts. Over the past generation the most selective schools in the country got into the habit of listing a high sticker price and then discounting that price as needed in order to fill a class. This model is becoming financially unsustainable."

Alan Scher Zagier reported from Columbia, Mo. He can be reached at http://twitter.com/azagier.

© 2011 The Associated Press. All rights reserved. This material may not be published, broadcast, rewritten or redistributed.Learn more about our Privacy Policyand Terms of Use.