Dwight Ott Special to the NNPA from the Philadelphia Tribune
Published: 17 June 2011 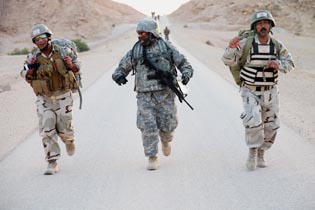 A U.S. Army soldier (2nd from left), assigned to Charlie Company, 703rd Brigade Support Battalion, 4th Advise and Assist Brigade, 3rd Infantry Division walks with Iraqi soldiers during a road march as part of a training exercise at Al Asad Air Base, Iraq, on May 4, 2011. The training was given to the Iraqis in support of Operation New Dawn.   DoD photo by Pfc. Brian Chaney, U.S. Army.

The flashbacks to Vietnam for Lorenzo "Jamaica" Banks were coming fast.  They were mixing with the horrors of the reality of being back home.

So Banks decided to do something about it.

He stepped off the Ben Franklin Bridge.

His near death turned into a resurrection.  He ended up getting physical treatment in a nice warm hospital bed along with mental health treatment.

He went on to become a leader of the homeless in Camden, rescuing others like him.

The trials of Lorenzo Banks mirror the troubles of many veterans of Vietnam.

Vietnam Silver and Bronze medal winner Sidney A. Lee, an African-American veteran activist, said that the jarring horrors of the two recent wars are bringing on increased suicides. He said small town high school students and compassionate idealists are never ready for the horrors, which are nothing like playing video games.

"Any moment you could die or be blown up or maimed.  You have your friend or buddy in the unit and you have to bring back that person, bring them back in pieces of the individual," observed Lee, whose personal story is written about in the book "A Soldier's Story."

Lee said that these are "invisible casualties" returning to the shores of America.

Vietnam veterans have estimated that since that war suicide has killed more of the soldiers who fought in that conflict than in the actual war itself.

And, now experts see the same trend rising among Afghanistan and Iraq veterans.

According to the Congressional Quarterly Weekly, more U.S. servicemen committed suicide than were killed in combat last year in Afghanistan and Iraq.  Some 468 servicemen took their own lives and 462 were killed in action.

According to experts, this testifies to the stress on the country's military personnel after 10 years of fighting in Afghanistan and Iraq.

African Americans have participated in every war fought by or with the United States and have suffered discrimination both during the war and on return home.

"They often have difficulty taking tests that would put them out of range of the front lines," Lee said.  "Assignments are based on test scores."

He said that Blacks and Hispanics make up a large percentage of the recruits.

Blacks were over 11 percent of population in the U.S. from 1965–69 but 12.6 percent of the troops in Vietnam were African-American.

During that period Blacks had a staggering fatality rate of 14.9 percent.

Black veterans have long had a history of being neglected by the Veterans Administration and other military support groups.

In the suit, plaintiff, Common Sense and Veterans United for Truth, warned that unless the U.S. institutes systematic and drastic measures to care for injured soldiers, the number of broken families, unemployed and homeless veterans, cases of drug abuse and alcoholism and the burden of the health care and social services systems will be incalculable.

Lee, president of the African American Post Traumatic Stress Disorders Association said that many of these African-American veterans will suffer from PTSD for the rest of their lives.  But, he said doctors often refused to diagnose the disease in Blacks.

The neglect of Black PTSD victims was so acute that Lee said the PTSD History Museum in Hawaii has documented that all of the PTSD studies were done, with the exception of African Americans for decades. He said African Americans weren't studied until the 1990s.

He said one reason they did not perform such studies on Blacks was because they were afraid of political accusations of legal genocide that might result from whatever findings came about.

Lee told the Final Call newspaper that even the Pentagon Papers made note of this.

According to Lee, those documents indicated that more African Americans in Vietnam were placed in combat positions because officials argued that Blacks were more suitable for frontline combat "because of their surroundings and the environment they grew up in."

The government reasoned, he said, that Blacks were more accustomed to fighting and shooting and stabbing in the ghettoes and more suitable to send into the jungle.

Sidney Lee told The Final Call that they were ignored until the 1990s, because prior to then Blacks were leading the way in combat service along with other minorities while whites went into the National Guard and Army Reserve for extra money for college.

Now, according to Lee, reservists are going through six to eight-week courses and are put in harm's way far more often than they were in Vietnam.

The change in demography of those on the frontlines has resulted into more attention to the PTSD problem, some have argued.

He said when white and Black soldiers return home they have difficulty adjusting to the society they knew so well before. They find that there are few that can understand what they went through, few with whom they can discuss it.  He added that sometimes it can be a stigma to talk about such problems and that complaints of PTSD often go on military records and that can damage careers.

Black women in combat zones have higher rates of PTSD, he said. He said sometimes they have been victims of assaults that are never reported.

Initially the former soldiers may take refuge in drugs of choice, some which may be given out for pain.

At some point it becomes just easier to commit suicide.

Unlike many other vets he survived.  But, he finally got treatment.  He decided to go back to the thing he knew best, fighting for others like himself in this not-so-grateful home of the free and land of the brave.  He became a leader of the homeless and dispossessed.