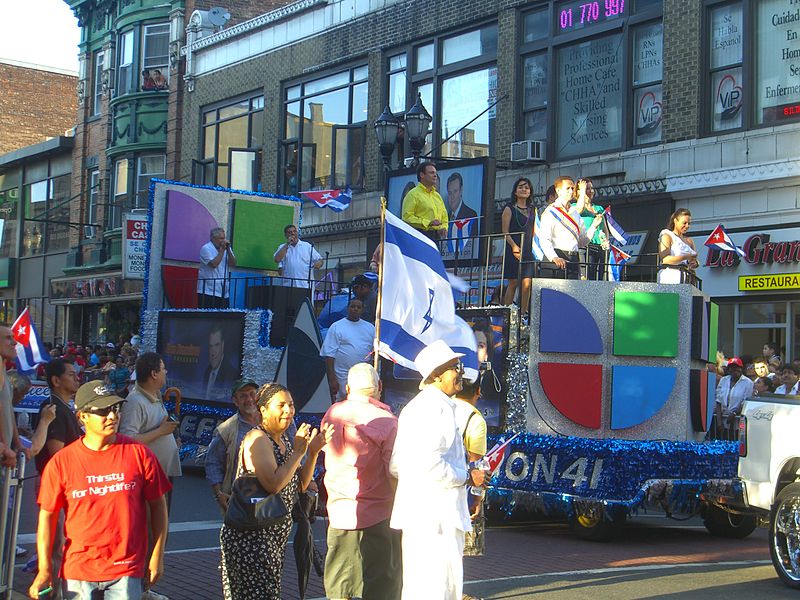 MIAMI (AP) -- Spanish-language television news is meeting a surge in Hispanic voting muscle and viewership with greatly expanded domestic coverage this year, just in time for the 2012 election season.

Industry experts say the growth could affect next year's election by increasing awareness of political issues among U.S. Spanish speakers and by encouraging more to vote in a population whose participation has lagged others. Members of bilingual households who prefer English are also expected to be influenced by the newscasts when they watch with parents and grandparents. The change comes as the latest Census data shows Hispanics propelled more than half of the country's population growth over the last decade.

"It's a cycle. You have a growing population that leads to more coverage, which forces more politicians to pay attention, and that leads to better, and more, news coverage and more engagement," said Alejandro Alvarado, head of Florida International University's Spanish-language Master's in Journalism program.

The nation's three top Spanish-language broadcast and cable networks are beefing up their election coverage and increasing get-out-the vote efforts. Of the nation's more than 20 million Hispanic citizens over 18, nearly half are bilingual and about a quarter are more comfortable in Spanish. Meanwhile, less than a third said they voted in 2010, according to Census data analyzed by the independent Pew Hispanic Center. Comparatively, nearly half of their white counterparts said they voted.

Still, the Pew study showed a record number of Hispanics voted in a non-presidential year, boosting their share of votes and showing their increasing political power. Latino turnout could be key in 2012 swing states like Florida, New Mexico, Nevada and Colorado.

Univision announced this spring that it plans to start a 24-hour cable news channel in 2012, along with several local newscasts. It's also created an investigative team and a news documentary division, while hiring reporters to cover the drug war, health care, Wall Street and the White House.

Univision and Telemundo's nightly newscasts, whose audiences are growing, drew a combined average of about 2.5 million viewers nightly last year according to Nielsen Co. That's small compared to the 23 million combined for the big three English-language network newscasts, but it's also a higher proportion of Hispanic households than the big three capture of the general audience.

On cable, CNN en Espanol, which has mostly catered to viewers in Latin America since its 1997 launch, revamped its domestic lineup last fall and added 14 reporters and anchors, several shows and a Miami studio.

Recognizing that many Latinos get their news from their mobile devices, all three networks are beefing up their online news departments.

Telemundo and Univision still fend off criticism for scantily clad women and violence in their non-news programming, but politicians are responding to the enhanced news coverage.

Univision, CNN en Espanol and Telemundo's weekend public affairs programs now regularly draw top leaders. Topics range from immigration to the disproportionate number of uninsured Hispanics. Earlier this year when President Barack Obama held a town hall on education, Univision was chosen for the first time as the network to air it.

It's not just about the big networks. In heavily Latino markets such as Miami and Los Angeles, independent local channels increasingly draw politicians and community leaders to their news talk shows.

For Nina Ocon, a 23-year-old public relations major at Florida International University, watching Spanish-language TV is partly about seeing news subjects who look and sound like her.

"In English, too often the Hispanic being interviewed is still the housekeeper," she said.

Although she mostly gets her news online in English, she watches local news in Spanish with her Nicaraguan mother and catches news about her stepfather's native Colombia from Latin American cable TV.

"I'll come and sit with them to watch the news. It's not so much a habit, it just happens," she said.

Spanish-language TV executives, and increasingly politicians and advertisers, are banking on attracting people like Ocon, who grew up on Spanish-language news but is now more comfortable in English.

Isaac Lee, the new head of Univision's news division, said the network is the choice of many bilingual viewers because they provide coverage through a Latino lens. He pointed to January's shooting of Arizona Congresswoman Gabrielle Giffords as an example.

"The mainstream media focused on what happened to her. We covered that but focused on the fact that it was a Hispanic who saved her and what put him into a position to be able to do that," he said.

During the 2010 California governor debate sponsored by Univision, GOP candidate Meg Whitman was forced to defend her decision to fire her long-time illegal immigrant housekeeper after the woman turned to her for help with her legal status. The scandal had been brewing before the debate, but Univision's airing of Whitman's comments translated into Spanish helped solidify a shift among Hispanic voters to eventual victor and Democrat Jerry Brown, said Fernando Amandi, of the research and consulting firm Bendixen & Amandi, which focuses on the Hispanic market.

Most studies find that Hispanic voters rank jobs, health care and education above immigration as priorities. Yet Spanish-language news skews toward a viewership of newer arrivals who relate directly to the immigration story, which helps give the issue greater resonance in the broader Latino community.

Telemundo news Vice President Ramon Escobar, a former NBC news executive, is unapologetic about the emphasis on immigration. He acknowledges fixing the nation's current system is a complex task but describes the debate as "our generation's civil rights era."

Spanish-language newscasts have a responsibility to lead coverage on the treatment of immigrants, Escobar said. Telemundo anchors spent months in Phoenix around the time of Arizona's passage of its tough 2010 immigration law, and it plans similar coverage in states that recently passed tough immigration laws like Utah, Georgia and Alabama.

As they expand, executives also face the growing challenge of holding onto second- and third- generation Hispanics who speak little or no Spanish. Language barriers are already beginning to break down as reporters do double-duty for CNN in English and Spanish and for NBC and Telemundo.

"Our emphasis is to have students be bilingual," Florida International's Alvarado said. "It's becoming a two-way conversation, with more journalists hopping back and forth - just like Hispanics do throughout the country."