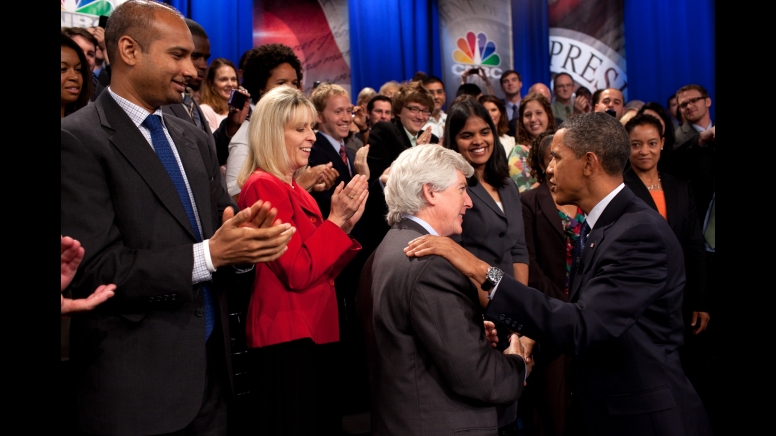 DURHAM, N.C. (AP) -- President Barack Obama pledged Monday to push business-friendly policies on issues including free-trade agreements and worker pension funds as he sought to make good on promises to grow the economy and jobs by boosting competitiveness.

"We know this is something we're going to have to work with everyone on, labor and business," Obama said as he sat with his jobs and competitiveness council, which met at an energy-efficient lighting plant in Durham, N.C.

Obama is seeking ways to brighten a bleak employment picture and he is pushing private-sector hiring and his own political fortunes during a two-day trip to two key states and a rendezvous with an important Hispanic constituency.

Obama will press for more jobs in targeted industries, including tourism and green energy, in North Carolina before ending the day with three fundraisers in donor-rich Miami. The trip wraps Tuesday in Puerto Rico, a visit considered essential as he courts the Puerto Rican vote on the mainland, especially in Florida.

The trip gives Obama a chance to offer a counterpoint to what is sure to be a sustained attack on his policies Monday night during a nationally televised debate among Republican presidential hopefuls in New Hampshire.

Before meeting with his jobs council at Cree, Inc., Obama toured a portion of the plant where the LED lights are assembled. One worker he met was Josephine Lynch, a 43-year-old mother of four who landed the job two months ago after two and a half years of unemployment. She was a substitute teacher in New Jersey before losing her job. She went back to school to get her electronic certification.

An independent analysis of the energy-efficiency proposal concluded that it could create more than 114,000 new jobs, many in construction. The study was conducted by The Real Estate Roundable, the U.S. Green Building Council and the Natural Resources Defense Council.

In their opinion piece, Immelt and Chennault also called for improved worker training. They said employers can't fill more than 2 million jobs partly because workers don't have advanced manufacturing skills. They also recommended cutting red tape to make it easier for contractors to obtain permits and for small businesses to secure government-backed loans.

"America needs more growth," the chief executives wrote. "The United States needs to reverse trends that developed over a long period of time, and the solutions aren't easy politically, socially or economically."

Top White House adviser Valerie Jarrett said many of the council's proposals can be undertaken without taxpayer funds or congressional action. "We wanted to look at ways where the private sector could really carry the ball and create this long-term sustainable growth," she said.

Obama's options are limited after spending about $800 billion in 2009 on an economic stimulus program. The administration and Congress are now focused on cutting long-term spending, the price for increasing the government's borrowing authority. The government says it will exceed its $14.3 trillion debt ceiling on Aug. 2.

At the same time, unemployment ticked upward in April and in May, bringing the joblessness rate to 9.1 percent. After voicing cautious optimism over the past several months that the recovery was beginning to take hold, Obama is now taking a different tack.

"I wish I could tell you there was a quick fix to our economic problems," he said Saturday in his weekly Internet and radio address. "But the truth is, we didn't get into this mess overnight, and we won't get out of it overnight.

In unveiling his jobs council proposals in North Carolina, Obama chose a state with the 10th highest unemployment rate in the country and the state where he won his narrowest victory in the 2008 presidential campaign.

Ferrell Guillory, an expert on southern politics at the University of North Carolina-Chapel Hill, sees a divided South, with many Atlantic Seaboard states like Virginia, North Carolina, Georgia and Florida benefiting from an economic transition into service industries, technology and biological manufacturing.

"These more robust states have become more competitive for Democrats," he said. "That's the new phenomenon that Obama caught more than the Republicans."

While Obama won North Carolina in 2008, Republican Sen. Richard Burr won re-election handily in 2010. Paul Shumaker, a consultant and adviser to Burr, said Republicans should not find too much comfort in that result. The biggest growth in registered voters in North Carolina is among independent voters. Shumaker said that micro-targeting research shows 70 percent of those voters are true uncommitted voters. Of the remaining 30 percent, two-thirds lean to Democrats.

"It would be a mistake for Republican to think that 2010 represented a shift in North Carolina," he said