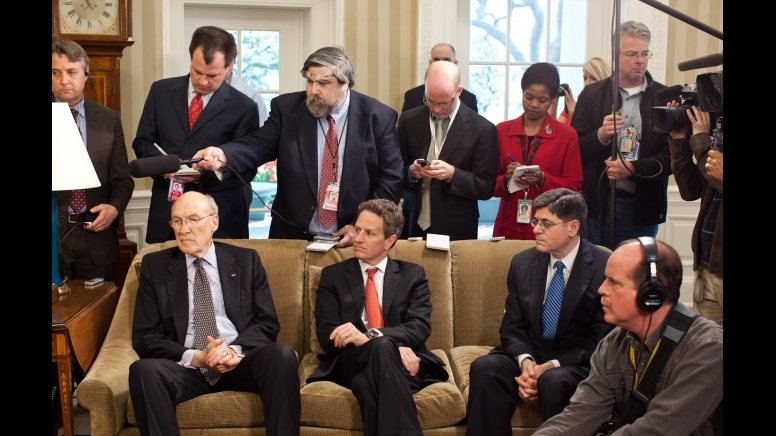 WASHINGTON (AP) -- The federal budget deficit is on pace to break the $1 trillion mark for a third straight year. Record deficits are putting pressure on Congress and the Obama administration to come up with a plan to rein in government spending.

Already, the deficit through the first eight months of this budget year is $927.4 billion, according to the latest report from the Treasury Department released Friday.

Three years ago that would have ranked as the highest ever for a full year. Instead, this year's deficit will likely exceed last year's $1.29 trillion imbalance and nearly match the $1.41 trillion record reached in 2009. The budget year ends on Sept. 30.

For May, the monthly deficit was $57.6 billion. That compared to $135.9 billion deficit for the same month last year. But much of that improvement came from a $45 billion write down in the estimated cost of the financial bailout program.

The latest Treasury report does show that more people are working and paying taxes this budget year, a positive sign. Government revenues have totaled $1.48 trillion for the eight months ended in May, a 10.3 percent increase over the same stretch in the previous budget year.

Still, government outlays totaled $2.41 trillion through May. And one of the fastest growing parts of the budget is the interest on the national debt. That rose 13.6 percent to total $165.3 billion.

The government is at risk of defaulting on those debt payments. That would likely happen if Congress fails to raise the nation's $14.3 trillion borrowing limit by early August. A default on the debt would rattle markets and send interest rates soaring, making mortgages and other consumer loans more expensive.

The increase in the debt limit is being held up by Republicans, who want President Barack Obama and Democrats to first agree to deep spending cuts equal in size.

A Washington Post-ABC News poll showed that a large majority of Americans believe the country could suffer serious harm if Congress fails to broaden the government's borrowing authority. But barely half of those polled said they support such an increase.

The White House and Democrats want to trim the deficit through spending cuts and also by ending tax cuts for the wealthy, which were first passed when President George W. Bush was in office and later extended by Obama.

Republicans reject that approach, saying it amounts to a tax increase. Their plan would focus exclusively on cutting spending. They have also proposed further tax cuts for the wealthiest Americans.

The government had a surplus of $127 billion in 2001, the year President Bush took office. It was projected to run surpluses totaling $5.6 trillion over the next decade.

But by 2002, the country was back in the red. The deficits grew after Bush won approval for broad tax cuts, pushed a major drug benefit program for seniors - which wasn't offset with revenue to pay for it - and the invasions of Iraq and Afghanistan were launched.

In 2008, Bush's last full year in office, the deficit had grown to $454.8 billion, a record at the time. And when the economy soured, it jumped into the $1 trillion-plus range.

The Bush administration pushed a $700 billion bailout program in 2008 to rescue the nation's banks, financial firms and automakers. The following year, the Obama administration continued the bailouts and also backed a $787 billion stimulus program to boost the economy.

Higher spending for unemployment insurance and food stamps, and the sharp contraction in tax revenues, also widened the deficit. And it grew even more this year after Obama and congressional Republicans signed off on a deal that extended the Bush tax cuts for two years and also reduced Social Security payroll taxes for one year.

The estimated losses from the financial bailout have been shrinking. The administration now projects those losses will total $48 billion, down from an estimate of $341 billion two years ago.