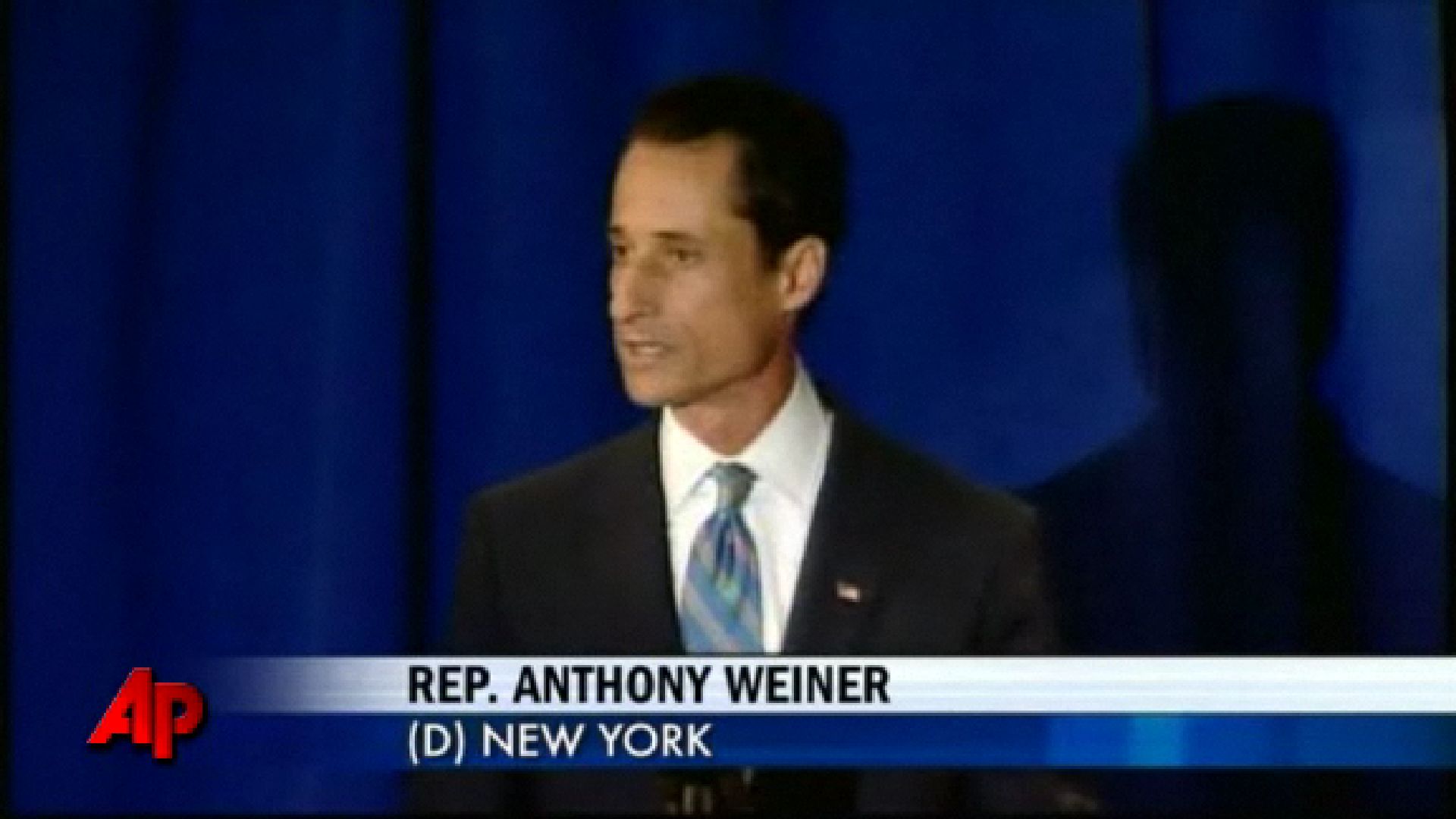 WASHINGTON (AP) -- Fellow Democrats pointedly refused to defend Rep. Anthony Weiner on Tuesday, telegraphing an unmistakable eagerness for him to resign after he admitted sending a lewd photo of himself to a woman via Twitter and lying about it.

Republicans swiftly sought political profit from the New York Democrat's predicament, which threatened to deepen when conservative blogger Andrew Breitbart said he had a sexually explicit photo of the 46-year-old congressman.

His political career in extreme jeopardy, Weiner had no public appearances. His spokesman did not respond to repeated requests for comment.

On Monday, after days of denials, the New York lawmaker admitted he had engaged in "several inappropriate conversations conducted over Twitter, Facebook, email and occasionally on the phone with women I had met online."

Alternately apologetic and defiant, he said he neither met nor had physical relationships with any of them, and added, "I am not resigning."

In fact, there is little that party leaders can do to force an errant lawmaker to quit, although House Republicans have moved decisively in the past year to purge their ranks of two men who wound up in embarrassing situations.

Most Democrats maintained an uncomfortable silence about Weiner's future, part of what several senior congressional officials described as a hope that over a few days, Weiner would reconsider his refusal to resign. If not, several noted pointedly, his district might be eliminated when lines are adjusted before the 2012 elections to account for a population shift that will cost New York two House seats.

"I wish there were some way that I can defend him, but I can't," the Nevada Democrat told reporters. Asked what he would do if Weiner called for advice, he replied he would tell him "call somebody else."

"Congressman Weiner's actions and deception are unacceptable and he should resign," GOP party chairman Reince Priebus said in a written statement.

"We do not need an investigation to know he lied and acted inappropriately, we need a resignation," he said, referring to a request from House Democratic Leader Nancy Pelosi for the House ethics committee to investigate the case.

Speaking of Pelosi and Rep. Debbie Wasserman Schultz of Florida, the Democratic party chairwoman, Priebus said they either "believe members of Congress are held to a different set of standards or they believe these actions demand his resignation."

Brad Woodhouse, a Democratic National Committee spokesman, referred a request for a comment to Wasserman Schultz's House office. He said the issue was a congressional one, but her spokesman declined comment on whether Weiner should resign.

Separately, the Republican House and Senate campaign organizations called on Democrats to return donations Weiner had made to them.

"Does ... Democrat Senate candidate Joe Donnelly (D-IN) plan to return the $5,000 he took from his friend Weiner in order to fund his political campaigns?" asked the National Republican Senatorial Committee. There was no immediate reply from Donnelly, a second-term House member who recently announced he would run for the Senate in 2012.

In the House, Democratic Rep. Betty Sutton of Ohio said through an aide she would donate to charity a $1,000 contribution she received from Weiner last year.

Demanding the return of cash from troubled donors has become a standard political tactic in recent years, practiced by both parties.

But the other facts in Weiner's case were anything but routine.

Instead, they reflected the growing impact of social media and little-known websites on the political fortunes of the nation's most powerful elected officials, in this case, a man with ambitions of becoming mayor of New York City.

Despite fielding numerous questions on Monday, some of them intensely personal about his marriage, Weiner left gaps at his news conference.

He said he could not guarantee that none of the women with whom he exchanged salacious pictures or messages was underage.

Asked whether he had phone sex, he sidestepped. "I was never in the same room as them, I never - had any physical relationship whatever," he said.

Asked whether he could guarantee that there was no X-rated photo in existence of himself, he replied, "No, I cannot."

That issue was first broached by Breitbart, who showed up at Weiner's news conference on Monday before the congressman did.

In an interview with The Associated Press on Tuesday, Breitbart said he had not yet released a sexually explicit photo taken of the congressman unclothed.

He said he would consider releasing the picture if he concludes that Weiner's staff tries to disparage any of the women with whom the congressman flirted online.

"Under the circumstances that those women that he's had these consensual relationships, that their personal information would start to be leaked from his team, I would strongly consider releasing the photo if he wants to make this an attack on these innocent women," he said.

At his news conference, Weiner apologized to the women and to all he misled with his earlier denials, but most often to his wife, Huma Abedin, who was not present.

Abedin, deputy chief of staff to Secretary of State Hillary Rodham Clinton, is well-known in her own right in Democratic circles. Some party officials said that was a factor in the general unwillingness to call for Weiner's resignation.

She has had no comment on her husband's controversy.

Under House rules, party leaders cannot force a lawmaker to quit, although they can press for a resignation and sometimes do.

Republicans successfully urged Indiana Rep. Mark Souder take that course last year after he admitted to an extra-marital affair with a member of his staff. They did so again in February, with Rep. Chris Lee of New York, who quit quickly after shirtless photos he sent to a woman he had met on Craigslist were published online.

By contrast, Pelosi issued a call shortly after Weiner's news conference for the House ethics committee to investigate his case to make sure no House rules were broken.

The committee had no comment, and with the House not scheduled to meet for nearly a week, it was unclear when it might begin work on the case.