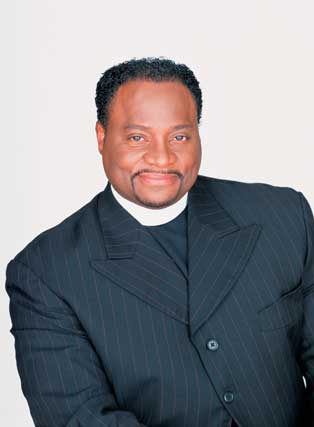 LITHONIA, Ga. (AP) -- The crowd still cheered for Bishop Eddie Long as he took the pulpit Sunday, but gone was the air of defiance that defined his appearance eight months ago when he rallied his congregation to battle amid lawsuits accusing the megachurch pastor of sexual misconduct.

Just days after settling the lawsuits filed by four young men who used to attend New Birth Missionary Baptist Church, the message was one of progress and prosperity to the several hundred gathered. The choir opened the two-hour 8 a.m. service with the gospel hymn "Moving Forward," which began: "I'm not going back, I'm moving ahead. Here to declare to you my past is over."

Long addressed a far smaller group than the one gathered back in September, when he compared himself to the Bible's ultimate underdog and vowed to fight like David versus Goliath against accusations that he abused his spiritual authority and coerced four young men into sexual relationships with gifts including cars, cash and travel. Then, thousands of supporters and observers packed the 10,000-seat sanctuary, which took on the atmosphere of an arena.

After Sunday's opening hymn, the service was decidedly focused on the church, not its controversial leader. For months, the scandal tainted Long's reputation as an influential spiritual leader who transformed his suburban Atlanta congregation of 150 into a following of 25,000 members and an international televangelist empire that included athletes, entertainers and politicians.

Long did not address the allegations or the settlement from the pulpit. Details of the resolution have not been disclosed.

"This decision was made to bring closure to this matter and to allow us to move forward with the plans God has for this ministry," the statement read.

Goldie Taylor, a social commentator on African-American issues who lives near the church, said the subdued atmosphere came as no surprise to her.

"He has fractured a body of Christ," she said. "He continues to lead what is a declining congregation. I think he owes it to them to participate, if he can, in their healing. Whether he can or not is really up to his congregation. Leading sometimes means walking away."

Long, who has been a vocal opponent of gay marriage, built his empire with charisma and a prosperity Gospel message that told followers God would reward the faithful with wealth. It was an idea he embodied, sporting jewels on stage, living in a mansion and driving a luxury car.

The bishop was well-regarded in Lithonia, just outside Atlanta in DeKalb County, home to one of the most affluent African-American communities in the U.S. His presence at the church projected an image of strength and fatherhood.

Given that reputation, the out-of-court resolution comes as no surprise. Long likely wanted to avoid a trial that could have kept him in the spotlight, said Jessica Gabel, a Georgia State University law professor who specializes in trial strategy.

"Nobody wants their dirty laundry aired in court," she said. "Every day there would be fanfare. This is not something you want in the media."

Gabel said that attorneys try to keep the terms of any agreement confidential, but that it's noteworthy that Long was not required to apologize or acknowledge any wrongdoing.

The case has not been investigated criminally because Georgia's age of consent is 16. The young men were 17 and 18 when the alleged sexual contact occurred.

The agreement also holds advantages for the plaintiffs. J. Tom Morgan, a former DeKalb County district attorney, said men tend to be particularly reluctant to take the stand in such cases - which they would have likely been required to do if it had gone to court later this year.

"I'm sure they wanted to settle if the defense offered a reasonable sum of money," he said.

Taylor said it is Long's flock that is paying for whatever transgressions may have occurred.

"If it's a dollar or $15 million, it is coming from the community that supports that institution," said Taylor. "Those community stakeholders deserve to see you prove your innocence. By and large, people are interpreting this decision to settle as guilt."