Missouri Tornado Single Deadliest in Us Since 1950 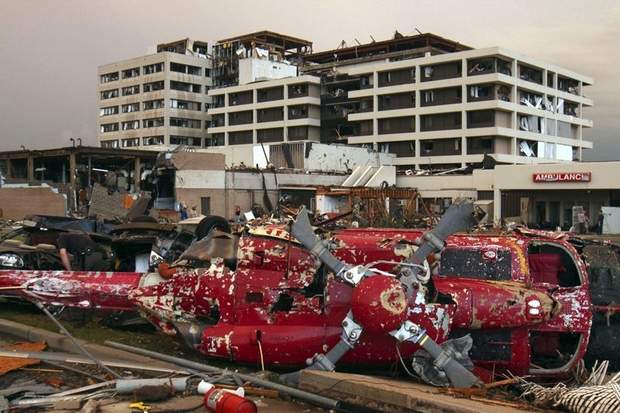 JOPLIN, Mo. (AP) -- A tornado that killed 117 people in Missouri was the single deadliest twister in the past 60 years, according to National Weather Service.

Until this week, the single deadliest tornado on record with the National Weather Service in the past six decades was a twister that killed 116 people in Flint, Mich., in 1953.

More deaths have resulted from outbreaks of multiple tornadoes. On April 27, a pack of twisters roared across six Southern states, killing 314 people, more than two-thirds of them in Alabama. That was the single deadliest day for tornadoes since the National Weather Service began keeping such records in 1950.

The agency has done research that shows deadlier outbreaks before 1950. It says the single deadliest day that it is aware of was March 18, 1925, when tornadoes killed 747 people.

Sunday's killer tornado ripped through the heart of Joplin, a blue-collar southwest Missouri city of 50,000 people, slamming straight into St. John's Regional Medical Center. The hospital confirmed that five of the dead were patients - all of them in critical condition before the tornado hit. A hospital visitor also was killed.

The tornado destroyed possibly "thousands" of homes, Fire Chief Mitch Randles told AP. It leveled hundreds of businesses, including massive ones such as Home Depot and Walmart.

Speaking from London, President Barack Obama said he would travel to Missouri on Sunday to meet with people whose lives have been turned upside down by the twister. He vowed to make all federal resources available for efforts to recover and rebuild.

"The American people are by your side," Obama said. "We're going to stay there until every home is repaired, until every neighborhood is rebuilt, until every business is back on its feet."

Craig Fugate, director of the Federal Emergency Management Agency, told NBC's "Today" show Tuesday that Obama has declared a disaster in the area, which means residents are eligible for his agency's assistance.

"We're here for the long haul, not just for the response," Fugate said.

Much of Joplin's landscape has been changed beyond recognition. House after house was reduced to slabs, cars were crushed like soda cans and shaken residents roamed streets in search of missing family members.

The danger was by no means over. Fires from gas leaks burned across city. The smell of ammonia and propane filled the air in some damaged areas. And the forecast looked grim.

The April tornadoes that devastated the South unspooled over a three-day period starting in the Plains. The Storm Prediction Center in Norman, Okla., said a repeat could be setting up, with a possible large tornado outbreak in the Midwest on Tuesday and bad weather potentially reaching the East Coast by Friday.

The Storm Prediction Center also issued a high-risk warning before the deadly outbreak in the South in April.