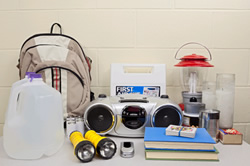 ATLANTA (AP) -- "Zombie apocalypse." That blog posting headline is all it took for a behind-the-scenes public health doctor to set off an Internet frenzy over tired old advice about keeping water and flashlights on hand in case of a hurricane.

"You may laugh now, but when it happens you'll be happy you read this, and hey, maybe you'll even learn a thing or two about how to prepare for a real emergency," wrote Dr. Ali Khan on the emergency preparedness blog of the federal Centers for Disease Control and Prevention.

Above the post is a photo of what appears to be a dirty-fingered female zombie.

As of Friday morning, the traffic showed no signs of abating.

"The response has been absolutely excellent. Most people have gotten the fact that this is tongue-and-cheek," Khan said.

More important, CDC officials said, it is drawing interest from teens and young adults who otherwise would not have read a federal agency's guidance on the importance of planning an evacuation route or how much water and what tools to store in case a major storm rolls in.

The idea evolved from a CDC Twitter session with the public earlier this year about planning for disasters. Activity spiked when dozens of tweets came in from people saying they were concerned about zombies.

Dave Daigle, a veteran communications specialist, proposed the idea of using a zombie hook to spice up the hurricane message. Khan, director of emergency preparedness, approved it immediately and wrote it himself.

"Most directors would have thrown me out of their office," Daigle laughed. "Ali has a good sense of humor."

In the blog, Khan discussed what fiction has said about flesh-eating zombies and the various infectious agents that different movies have fingered as the cause.

His favorite zombie flick is "Resident Evil," but his interest in unpredictable terrors is driven more by his decades of work tracking real-life infections like Ebola hemorrhagic fever, bird flu and SARS.

Almost as rewarding was a nice comment Daigle said he received from his 14-year-old daughter, who has shown little interest in her dad's work but saw the zombie post and said, "This is cool!"

There have been few comments asking whether this is the best way for the government to spend tax dollars. The agency is under a tight budget review at the moment and facing potentially serious budget cuts. But the zombie post involved no extra time or expenditure, CDC officials said.

"We have a critical message to get out and that is CDC saves lives while saving money. If it takes zombies to help us get that message out, then so be it," said agency spokesman Tom Skinner.

Whether the message sticks still has to be determined. The agency is planning a follow-up survey to see if people actually did prepare emergency kits or follow Khan's other advice.

CDC deserves credit for trying something like this, said Bill Gentry, director of the community preparedness and disaster management program at the University of North Carolina's school of public health.

But that doesn't mean the agency should start using vampires to promote vaccinations or space aliens to warn about the dangers of smoking.

"The CDC is the most credible source out there for public health information," he said. "You don't want to risk demeaning that."