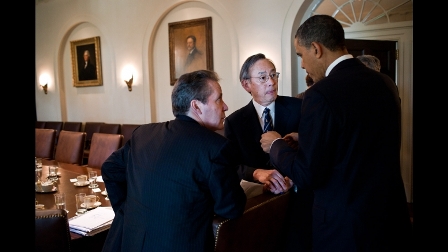 HONOLULU (AP) -- The laid-back tropical paradise seen in postcards and tourists' photos of Hawaii has a less pleasant flipside: homeless people sleeping in tents near Waikiki Beach, men splayed out next to public bathrooms, drug addicts and drunks loitering at an oceanside park.

With President Barack Obama hosting a major Asia-Pacific economic summit in Honolulu in November - one that will draw dozens of heads of state and focus international attention on the tourist mecca - state leaders have begun pressing for solutions to solve a homelessness problem that's as deeply entrenched in Hawaii as nearly anywhere in the country.

Abercrombie simply called it a "happy coincidence" that his plans would be in place in time for the Asian Pacific Economic Cooperation conference, stressing that solving the homelessness issue is one his top priorities.

But his administration has also acknowledged the summit gives it reason to act now.

"We still are focused on solving this problem because it's our moral obligation to solve this problem. On the other hand, it's a handy deadline before which we want to have some progress to show our community and the international community," Lt. Gov. Brian Schatz said.

Hawaii has the third-highest ratio of homeless people to residents of any state, better only than Nevada and Oregon, according to the National Alliance to End Homelessness. Most of Hawaii's unsheltered live in Honolulu, including those who spend their days and nights on the beaches, parks and streets of Waikiki, the famed neighborhood of white sand and hotels where the APEC conference will be held.

Several hundred homeless are estimated to live in the district. At a Waikiki park fronting the ocean one recent morning, several slept in tents on the grass and in the shade under trees. A group of about eight gathered at a bench to attend a Bible study session. One man slept splayed out on the ground next to park bathrooms.

Ivan Tandberg, a visitor from Calgary, Alberta, said that while the homeless didn't bother him much, it wouldn't look good to have so many people living on the streets next to a high-profile international conference.

"I'm sure Obama won't want to see a bunch of them around. It's not going to impress other world leaders," Tandberg said as a homeless person napped nearby.

Honolulu Mayor Peter Carlisle said the city is working hand-in-hand with the state and he hopes the 90-day plan will make a difference before the conference begins.

Carlisle said there were limits to what the city could do, but an increased police and security presence around Waikiki will mean "more eyes to see what's going on" and this may lead to more homeless being picked up if they appear to be a danger to themselves or others.

"Some of them are violent, some of them are mentally ill, some are so intoxicated you can't roust `em. And that's something we simply just can't tolerate during this particular period of time," Carlisle told a security conference last year. "We've got to make sure that corridor in Waikiki is free of those problems."

Hawaii officials have tried to solve the problem in the past. Abercrombie's predecessor, Gov. Linda Lingle, called for the building of new shelters and transitional housing; those are actively used, but there are still just as many people on the streets. Honolulu has tried to close off parks to the homeless by shutting them down for renovations but that merely pushed people to other parks and sidewalks.

The latest efforts combine heightened efforts by outreach workers to help homeless along with reductions in the incentives to live out in the open. One part of the governor's plan is to ask church groups not to feed people in parks and instead to feed them in shelters.

Part of Honolulu's homeless problem is rooted in the pairing of some of the nation's highest housing costs with below-average wages and the fact that the gorgeous year-round weather makes it easier for people to live out in the open.

The nonprofit National Housing Conference says fair-market rent for a two-bedroom apartment in Honolulu was $1,704 in 2009 - second only to San Francisco. And yet the city's average weekly wage was $834, less than the national average of $870, according to the most recent federal data.

Steven Rente, 56, moved to the streets after he lost his $10-an-hour job as a security guard. He thought about going to a shelter, but it has bedbugs and rules, he said. So he sleeps at a bus stop at night and spends his days at a Waikiki park.

"They think we're drug addicts or alcoholics or whatever it is," said Rente, who was born in Oahu. "I don't do that. The only reason I'm out here is because I lost my job."

Also playing a part are new arrivals who come dreaming of a life in paradise, only to discover it's hard to find jobs that pay enough to cover the high cost of living. Some spent their savings to fly here because it's better to be homeless where the weather is so nice. Still others, particularly those from Pacific island nations, travel to Hawaii to receive critical medical care that's not available at home.

A 2010 University of Hawaii survey showed 13 percent of those receiving homeless outreach services in Honolulu had been in Hawaii for less than a year.

Marc Alexander, the governor's coordinator on homelessness, said the issue ultimately can only be addressed person by person since everyone's situation is different. Solutions range from job training to providing psychiatric care to, in the long-term, making more affordable housing available.

"It really is going to require a multifaceted approach. There is no magic bullet. There is no one great project that we can come up with that's going to immediately take care of everything," he said.