Helen Silvis of The Skanner News
Published: 16 May 2011 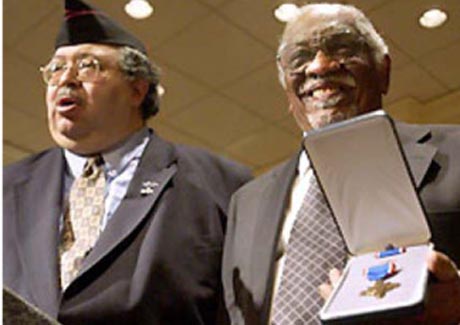 Last weekend, Sen. Charles Schumer of New York sent a letter to Army Sec. John McHugh requesting America's highest military award, the Medal of Honor, for WWI hero Sgt. Henry Lincoln Johnson. It was 93 years to the day after Johnson fought off a band of 20 enemy soldiers in the dead of night. A member of the famed 369th, the Harlem Hellfighters, Johnson fought on after his rifle jammed and despite his wounds, using his bolo knife, rifle butt and bare hands to save a comrade and repel the attack.

"On this momentous occasion of the 93rd anniversary of the legendary Battle of Henry Johnson, I am deeply honored and humbled to recommend this brave and selfless hero of World War I for our nation's highest award: the Medal of Honor," writes Sen. Schumer in the letter.

"In light of incredible new, never-before-considered evidence that my office has uncovered, I request that Sergeant Henry Johnson's case be reopened and that he be expeditiously awarded this long-overdue honor."

Schumer's staff uncovered new evidence that fulfills the stringent requirements for the award. They discovered chain of command endorsements: a memo from the commander of the American Expeditionary Forces, Gen. John Pershing, a report by Johnson's company commander Maj. Arthur Little, and a letter written by his regiment's commanding officer, Col. William Hayward. The new evidence also includes a required eyewitness account by Needham Roberts, the sentry Johnson rescued; and an impartial account by a visiting military observer. 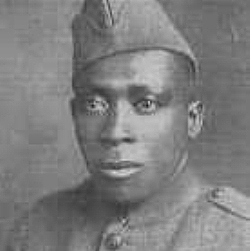 Here's how Sen. Schumer describes Johnson's selfless acts of courage in the letter.

"Nearly a century ago, in the early morning hours of May 15, 1918, Sergeant Johnson and his fellow soldier, Private Needham Roberts, were protecting an at outpost along the French-German border when they were attacked by a German raiding party numbering about 20, whose intention was to take prisoners and gather intelligence. Johnson and Roberts were significantly outnumbered, and both were injured early in the attack. As the skirmish unfolded and the larger force pressed in, the pair mounted a fierce response which disrupted the attack and resulted in a number of enemy casualties. Nevertheless, as the battle raged on and volleys of grenades and bullets were exchanged, both men experienced setbacks that could have led to death or capture: Johnson's rifle jammed and Roberts was injured so severely that he was unable to stand up.

Then with the enemy platoon pressing in, at a point when surrender would seem the only option, Johnson came forth with an extraordinary display of bravery. Without use of his firearm, and with Roberts down, Johnson used his rifle as a club to beat back one of the enemy soldiers. Meanwhile, Roberts had succumbed to two other enemy troops and was being carried away. Despite his own serious injuries, and while exposing himself to enemy fire, Johnson quickly sprang into action to save Roberts from capture. He leapt towards the captors and neutralized them with only his bare hands and his bolo knife, plunging it into the crown of one of the enemy. Johnson pulled his injured comrade back out of the line of fire, and held the contested ground while reinforcements arrived. 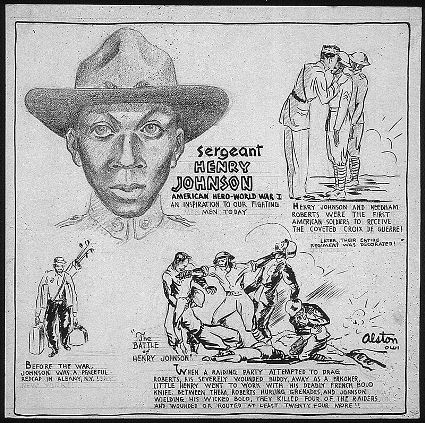 Finally, having suffered several casualties and with their raiding party in disorder, the Germans made a hasty retreat, abandoning a cache of weapons and gear, and without taking a single life or prisoner. This well-trained, "superior force" (in the words of General John Pershing) was defeated by the stunning demonstration of selfless courage by a lone sentry. Although the battle was over and Johnson was on the verge of collapse due to his near-fatal injuries, as reinforcements arrived, Johnson hung on long enough to ensure medical care for the man he had just saved. In his eyewitness account, Roberts recalls Johnson's quick words: "…grab Roberts and rush him to the hospital, he is seriously wounded." Johnson fainted soon after.

Even though some reports have conflated the actions of Johnson and Roberts, and while Roberts fought bravely, the French recognized that Johnson was the clear hero of the battle, and awarded him their highest possible award for valor: the Croix de Guerre Avec Palme. Johnson was the first American of any race to receive this award.'

During the decades of segregation, Black soldiers were not allowed to serve with their fellow Americans, but instead served with the French forces, including Africans from the French colonies. Accounts from WW1 say it was the African troops who introduced the Hellfighters to bolo knives, like the one Johnson used to such good effect.

Finally in 1996, Sgt. Johnson was posthumously awarded a Purple Heart,. Then in 2003, his son, Tuskegee Airman Herman Johnson accepted America's second-highest honor, the Distinguished Service Cross, for his father. But many campaigners familiar with the case, believed that Johnson deserved nothing less than the Medal of Honor. Sen. Ron Wyden has been working with Schumer to gather support in Congress for the award. Other advocates include Vietnam veteran John Howe,  Portland City Commissioner Nick Fish, and former Rep. Joe DioGuardi, who worked for many years to gain recognition for Johnson.

Schumer closes his letter with a plea that McHugh speedily review the case.

"The bold actions of Sergeant Johnson are most deserving of this greatest honor which the United States can bestow on its service members. I realize that consideration of this recommendation will proceed with due deliberation, but I implore you to ensure that the case is reviewed expeditiously so that a historical injustice no longer remains unresolved. It is my great hope that by the 94th anniversary of The Battle of Henry Johnson, Johnson's granddaughter, his next of kin, can receive the award on his behalf knowing that her grandfather's legacy will not only be that of a great American war hero, but also will show that it is never too late to correct a historical error."

If McHugh approves the award, he will send his recommendation to the Joint Chiefs of Staff. They would be the last stop before a Congressional vote.