Producers Try to Bring Broadway Spiderman Back to Life 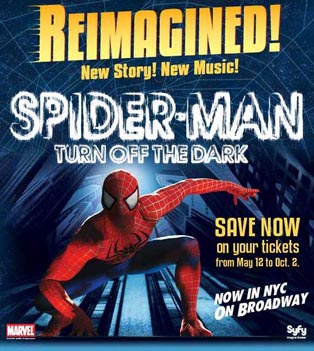 NEW YORK (AP) -- Taking a page from the comics, producers of Broadway's "Spider-Man" musical are hoping their battered hero can somehow return from the dead.

"Spider-Man: Turn Off the Dark," Broadway's most expensive and audacious show, emerges from a three-week hiatus on Thursday night with what the creative team and producers say is a cleaner story, tighter music and more love story.

About a dozen people were waiting for the box office at the Foxwoods Theatre to open to buy tickets Thursday morning and, in a sign that demand may be softer than when the musical first opened its doors in November, tickets for the reimagined show were available for that night's performance.

"I've heard all sorts of good and bad things about it," said Bena Leslie, 30, a business manager for an environmental consulting company in San Diego, who bought a ticket to Thursday's performance. "I would like to see for myself."

Rick Miramontez, a show spokesman, said tickets to the new show are "selling briskly," though the show's own website indicated dozens of available seats for the next few days. Some ticket brokers were even offering up to 40 percent off orchestra and balcony seats.

The $70 million musical with music by U2's Bono and The Edge reopens with most of the cast intact but without the visionary Julie Taymor as director. Reeve Carney, who plays Peter Parker, said the changes have been reinvigorating.

"There's an energy in the company because of having a clear direction, knowing where we're headed and knowing that it's going to be to a greater place," said Carney. The new script, he says, "jumps off the page at you."

Playwright Roberto Aguirre-Sacasa, director Philip William McKinley and choreographer Chase Brock cleaned up a story that had wandered into darker and mythological themes, while Bono and The Edge reworked the songs. More flying stunts were added and the romance between Peter Parker and Mary Jane returned to center stage.

The original show began previews in November and soon went bad. Performances were canceled and stunts went awry, leaving actors trapped hanging over the audience. There were five major accidents to cast members, including one to lead actress Natalie Mendoza, who left the show after suffering a concussion.

The worst accident happened to actor Christopher Tierney, who suffered a fractured skull, a fractured shoulder blade, four broken ribs and three broken vertebrae on Dec. 20 when he tumbled in front of a shocked preview audience after a safety harness failed. In April, only four months after the fall, he returned to the show and is expected to again execute the main Spider-Man aerial stunts on Thursday.

Every new crisis seemed to postpone another opening, leading to it break the record for the longest run of preview performances, a dubious milestone.

All the bad press _ including professional critics who slammed the show in February _ didn't hurt the show at the box office, where it regularly sold out and was among the highest earners on Broadway.

Greg Wendelken, 49, who works in commercial real estate in Seattle, picked up a ticket Thursday to see what all the fuss was about. "All the uproar about it," he said. "Biggest budget on Broadway. I'm intrigued."

The new show expects to have about a month of previews before its June 14 opening. Since it missed this year's Tony Award deadline and the potential prizes, it could have a tumultuous summer if the economy fails to improve, tourists flock to other shows and New Yorkers who saw the original now sniff at lining up to see the rebooted Spidey.

Producers are hoping the reaction to the reboot will be as typical as that of Gabrielle Hanson-Moore, a 19-year-old student at Florida State University who was in line for tickets when the box office opened at 10 a.m. Thursday.

"I really like Spider-Man," she said. "He's one of my favorite superheroes. I really want to know how they're going to turn it into a musical."