Poll: Youth Without Degrees at End of Job Line 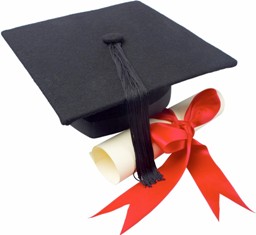 WASHINGTON (AP) -- The nation's economic upheaval has been especially hard on young people trying to start their working lives with a high school education or less. Only about a third are working full-time, compared with two-thirds of recent college grads, according to an Associated Press-Viacom poll.

Most say money was a major reason they bypassed college, and the vast majority aspire to more education someday.

Christopher Cadaret's been fixing TVs and stereos for fun since he was 10 years old and thinks he'd like to work in electronics or auto repair. But four months after he dropped out of high school, he hasn't found any kind of job.

He's tried a local electronics company, the hardware store, the dollar store, the minimart. Nothing.

"I'm seeking work, anything that is put in front of me," said Cadaret, 18, who lives with his father in Burkesville, Ky., a small town amid the hills and farmland along the Tennessee border. Without that first toehold on work, his dream of earning enough to save up for technical training seems far away.

Four in 10 of those surveyed whose education stopped at high school are unemployed. Less than a quarter have part-time jobs, the poll of 18- to 24-year-olds found.

The Labor Department's figures document how much harder it's become for these young adults to find a job since the recession that began late in 2007. The unemployment rate has been over 20 percent each March for the past three years for high school graduates ages 16-24 who have no college education. That's up from 10 percent in March 2007 and 14.5 percent a year later.

For college grads that age, March unemployment peaked at 8.5 percent this year. The government's figures count only those considered actively looking for jobs.

Young adults who skipped higher education are willing to work and have some experience; the vast majority in the AP-Viacom survey have held paying jobs at some point. About two-thirds hold high school diplomas. But a majority - almost six in 10 - say the high school they attended did only a fair to poor job in helping them prepare for work.

About three-fourths worry at least a little about having enough money to get by from week to week.

Almost four in 10 still lean on their parents or relatives for financial support. Still, most feel that their families' financial situations have held them back, especially those whose families earn less than $50,000 per year, according to the survey conducted in partnership with Stanford University.

Three-fourths of those who bypassed college cite cost as a reason. More than half - 56 percent - say money was "very" or "extremely" important to their decision.

They still believe in the power of higher education. Nearly three-fourths say they hope to return to the classroom someday, either for trade school or college.

"I just feel like I've got enough drive and I'm not going to quit," said high school senior Jonathan McDaniel, who's made plans to join the Navy when he graduates from high school in Pittsburg, Okla., this spring. "If you work hard enough, you will get where you want to be."

McDaniel, 18, is interested in pursuing a college degree and maybe a career as a police officer or airplane mechanic. He figures starting out serving on an aircraft carrier "will give me a solid foundation to build my life on."

Cost isn't the only reason many stopped school rather than starting college. Almost half say getting real-world experience before going through more school was a key factor in their decision. And almost as many said they were influenced by their ability to find a job right after high school.

"I kind of always knew college wasn't for me," said Ayla Godfrey, 19, of Charlotte, N.C. "I was ready to get out and work, and I really didn't want to go back to school anymore."

Godfrey said it took her months and more than 100 applications to find work in a clothing store after she graduated from high school in 2009. She later worked as a hostess at an assisted living facility but quit that job after becoming pregnant. Godfrey, who lives with her boyfriend's family and relies on his paycheck, says she feels confident she'll find job happiness after her baby is born.

"I have to make a life for my little baby girl, and I'm willing to do whatever I have to do," she said.

Young people whose education stopped at high school don't report as much certainty about the future as those in college, but they're still strikingly optimistic - eight in 10 are at least somewhat confident they'll find a career that will make them happy.

Most of those with jobs don't feel they've found their calling, however. Six in 10 say their job is just something to get them by, not a career or a stepping stone to one.

And the dismal job market leaves many feeling shut out.

"It's going to take time for the economy to work itself back up for people to find jobs," said Cadaret, who keeps looking. Meanwhile, he said, "I'm worried about money all the time."

The AP-Viacom telephone survey of 1,104 adults ages 18-24 was conducted Feb. 18-March 6 by GfK Roper Public Affairs & Corporate Communications. The margin of sampling error is plus or minus 3.5 percentage points.

Stanford University's participation in this project was made possible by a grant from The Bill & Melinda Gates Foundation.