By Andrew Taylor of the Associated Press
Published: 15 April 2011 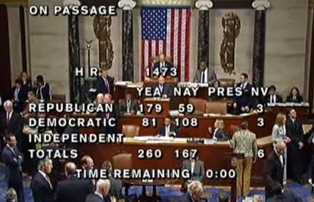 WASHINGTON (AP) -- A bold but politically risky plan to cut trillions of dollars from the federal budget steamed toward a party-line House vote Friday, as insurgent Republicans rallied behind the idea of fundamentally reshaping the government's role in health care for the elderly and the poor. The Skanner news Video

The GOP plan, expected to be voted on Friday, promises more than $6 trillion in spending cuts over the next decade compared with the budget that President Barack Obama offered in February, relying on stiff cuts to domestic agency accounts, food stamps and the Medicaid health care program for the poor and disabled.

The GOP's solution to unsustainable deficits that presently require the government to borrow more than 40 cents of every dollar it spends is to relentlessly attack the spending side of the ledger while leaving Bush-era revenue levels intact. It calls for tax reform that would lower the top income tax rates for corporations and individuals by cleaning out a tax code cluttered with tax breaks and preferences, but parts company with Obama and the findings of a bipartisan deficit commission, who propose devoting about $100 billion a year in new revenues to easing the deficit.

The Republican plan "disavows the relentless government spending, taxing and borrowing that are leading America, right at this moment, toward a debt-fueled economic crisis," according to the document.

Democrats and many budget experts say this spending-cuts-only approach is fundamentally unfair, targeting social safety net programs like Medicaid and food stamps while leaving in place a tax system they say bestows too many benefits on the wealthy.

But their budget plan calls for transforming Medicare from a program in which the government directly pays medical bills into a voucher-like system that subsidizes purchases of private insurance plans. People 55 and over would remain in the current system, but younger workers would receive subsidies that would steadily lose value over time.

Virtually every budget expert in Washington agrees that projected Medicare cost increases are unsustainable, but the GOP initiative - attacked by Democrats as ending Medicare's guarantee as we know it - has launched a major-league Washington imbroglio.

The primary author of the GOP plan is unfazed by the Democratic attacks.

"The biggest threat to Medicare is the status quo and the people defending it," House Budget Committee Chairman Paul Ryan, R-Wis., told The Associated Press on Thursday.

"They end the Medicare guarantee," said top Budget Committee Democrat Chris Van Hollen of Maryland. "They force seniors to leave the Medicare program and go into the private insurance market where costs continue to rise day in and day out."

The House began debate on the measure Thursday with a vote on it and several competing alternatives - most importantly a Democratic substitute raising taxes on the wealthy and a plan by GOP conservatives to cut far more harshly - scheduled for Friday.

The GOP plan isn't actual legislation. Instead, under the arcane and decidedly imperfect congressional budget process, the measure sketches out a nonbinding blueprint each year for running the government. The resolution doesn't require the president's signature, but it does set the framework for changes to spending or tax policy in follow-up legislation.

The most immediate impact of the GOP plan would be to cut the $1 trillion-plus budget for appropriated programs next year by $30 billion, following on $38 billion in cuts just adopted. That would return domestic agency accounts below levels when George W. Bush left office.

Friday's voting comes on the heels of final congressional action on a long-overdue plan to wrap up the 2011 budget year. That measure claims $38 billion in savings but just $20 billion to $25 billion in lower deficits because illusory spending cuts comprise a big portion of the measure.

The Democratic-controlled Senate has yet to produce its alternative plan as the Budget Committee chairman, Sen. Kent Conrad, D-N.D., and other members of Obama's independent fiscal commission pursue a bipartisan "grand bargain" blending big spending curbs with new revenues flowing from a simplified tax code.

The budget deficit is projected at an enormous $1.6 trillion this year, but more ominously, current projections show an even worse mismatch as the baby boom generation retires and Medicare costs consume an ever-growing share of the budget. But there's a standoff between House Republicans and Obama over the president's plan to raise taxes on upper-income people.

For the long term, Ryan's 10-year plan still can't claim a balanced budget by the end of the decade because of promises to not increase taxes or change Medicare and Social Security benefits for people 55 and over.

But eventually annual deficits are projected to fall to the $400 billion range, enough to stabilize the nation's finances and prevent a European-style debt crisis that could force far harsher steps, Ryan says.

The GOP plan seeks to cut $5.8 trillion from the budget. But that amount is inflated because, like Obama, the Ryan plan underestimates the likely costs of military operations overseas to produce $1 trillion in iffy spending cuts.

The GOP measure also comes after Obama on Wednesday promised stiffer deficit curbs than contained in his February budget.

Obama proposed reducing deficits by $4 trillion over 12 years, with $3 trillion coming from spending reductions and $1 trillion from additional revenue. He would leave Medicare and Medicaid intact but with new cost controls.

But after Ryan asked the White House budget office for more details, he was pointed to a news release.