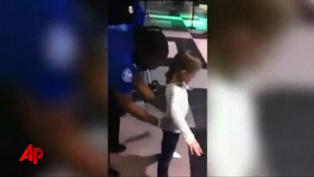 LOUISVILLE, Ky. (AP) -- A Kentucky couple said Wednesday that they want the Transportation Security Administration to change how it screens children after their 6-year-old daughter was frisked at the New Orleans airport.

Selena Drexel told ABC's "Good Morning America" the family was returning home from a vacation earlier this month when their daughter Anna was selected for a pat-down.

The couple posted a video of the search on YouTube. It shows a TSA agent patting down the child and explaining the procedure to the girl and her parents. The screener says that she will use the back of her hands on sensitive areas and will "put my hand in the waistband."

The girl's father, Todd Drexel, says Anna was confused by the search and started crying afterward because she thought she'd done something wrong.

Selena Drexel says such searches are inappropriate for children because they're usually told not to let adults touch them in sensitive areas. She said she posted the video because she "had a very bad feeling that what happened was wrong."

In a statement, the Transportation Security Administration says the officer followed proper procedure but that the agency is reviewing its screening policies for "low-risk populations, such as young passengers." The statement says the agency is exploring ways to "move beyond a one-size fits all system."

TSA screeners are instructed to use a "modified" pat down for children 12 and younger, according to the agency's website.

A congressman whose subcommittee oversees national security issues said he was "personally outraged and disgusted" over the security pat-down.

"This conduct is in clear violation of TSA's explicit policy not to conduct thorough pat-downs on children under the age of 13," Rep. Jason Chaffetz, of Utah, chairman of the House Oversight and Government Reform Subcommittee on National Security, said in a statement Wednesday.

Jennifer Mitchell, a child safety advocate, said after viewing the YouTube video that the pat-down seemed "a little invasive."

"This is a hard issue because we have national security on one hand... and children's safety on the other," said Mitchell, co-president of Child Lures Prevention, a Shelburne, Vt., organization that works to prevent crimes against children.

Mitchell said she knows families who have declined to fly because they don't want their children frisked. She recommended that parents tell children before going to the airport that they may get a pat-down.

But children should be told "the only reason it would be allowed is the parents are right there, the clothes are not being removed, the parents are watching to make sure it's done ok," Mitchell said.

Martin Macpherson, the director of the London-based Coalition to Stop the Use of Child Soldiers, said he is not aware of instances when terrorists have used children as young as six in an attack.