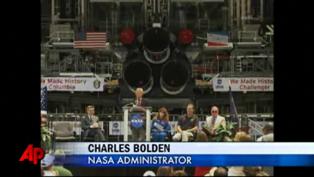 CAPE CANAVERAL, Fla. (AP) -- On a memorable day in space history, NASA began its goodbyes to the shuttle program Tuesday, announcing the aged spacecraft will retire to museums in Cape Canaveral, Los Angeles and suburban Washington and sending a test-flight orbiter to New York City.

It was an emotional day - the 30th anniversary of the first shuttle launch and the 50th anniversary of man's first journey into space by Soviet cosmonaut Yuri Gagarin. Just two more shuttle flights remain, and the head of NASA choked up as he revealed the new homes for the spacecraft in an event at the Kennedy Space Center.

"For all of them, take good care of our vehicles," NASA Administrator Charles Bolden, a former astronaut, said with a catch in his voice. "They served a nation well, and we at NASA have a deep and abiding relationship and love affair with them that is hard to put into words."

The choice of homes for the spaceships - sometimes described as the most complex machinery ever devised - was hotly contested. Twenty-one museums and visitor centers around the country put in bids.

The winners will have to pay NASA $28.8 million for the cost of preparing and ferrying the shuttles to their new homes. Across the country, cheers erupted at the four winning facilities and groans at the locations that lost out.

After it closes out the program, shuttle Atlantis will stay in Cape Canaveral at the space center's visitor complex, just miles from the pair of launch pads used to shoot the orbiters into space. Space center workers, some of whom are likely to lose jobs when the shuttles quit flying later this summer, gave Bolden a standing ovation and whooped and hollered with the news.

Shuttle Endeavour, which makes its last flight at the end of the month, will head to the California Science Center in Los Angeles, about 60 miles from the plant where the shuttle was assembled.

"I'm still pinching myself," said Robert Yowell, who drove to the museum upon hearing the news. He worked as a NASA flight controller at the Johnson Space Center from 1989 to 2000. "Nobody in my circle of space geeks guessed that LA was going to get this."

Discovery's new home will be the Smithsonian Institution's branch in northern Virginia near Washington Dulles International Airport. In exchange for the oldest shuttle, the Smithsonian is giving up Enterprise, a shuttle prototype used for test flights in the 1970s.

Enterprise will go to New York City's Intrepid Sea, Air and Space Museum for display in a glass enclosure on a Manhattan pier on the Hudson River, next to the aircraft carrier that houses the museum.

"It's really important for children to actually see the shuttle, so they don't forget the history of America's space exploration," he said.

But there was no celebrating among the hundreds of visitors and workers watching the announcement on television at the National Museum of the Air Force near Dayton, Ohio, the hometown of the Wright brothers.

The decision "doesn't recognize the contributions and innovations that came from the heartland," complained Rep. Mike Turner, an Ohio Republican.

Houston was bitterly disappointed that Johnson Space Center, home of Mission Control, would only get seats from a shuttle.

"There was no other city with our history of human space flight or more deserving of a retiring orbiter," Houston Mayor Annise Parker said.

Dominguez denied politics played any role. "It's unfortunate that the middle of the country didn't fare as well as the coasts," she said.

Asked why Houston was bypassed, she said: "We just didn't have enough to go around."

There were originally four space shuttles. Challenger was destroyed during liftoff in 1986, and Endeavour was built as a replacement. Then Columbia was lost in 2003. The space shuttles are being retired as part of NASA's shifting and still-uncertain future for sending astronauts into space.

"The shuttle program will go down in history as a very, very successful program," said former shuttle commander Eileen Collins, who led the crew of Discovery on the first flight after Columbia.

"We made mistakes. The space community made mistakes along the way. We learned from them," she told The Associated Press at the National Space Symposium in Colorado Springs, Colo.

After the 2003 Columbia accident, President George W. Bush proposed sending astronauts back to the moon. To pay for the expensive new rockets, NASA would retire the space shuttles.

President Barack Obama continued the shuttle retirement, but cancelled the return-to-moon mission in favor of a combination approach. Private companies would build their own rockets, and NASA would pay for rides to the International Space Station, like a taxi.

At the same time, NASA would work on bigger rocketships that would eventually take astronauts to other places, such as an asteroid, and eventually to Mars.

From the space station, American astronaut Catherine Coleman said during the ceremony that the retirement of the space shuttle program should not be viewed as an end.

"It represents the next step in extending humanity's reach further into space," said Coleman, one of six people living on the orbiting outpost.

Earlier Tuesday, Coleman's station crewmate astronaut Ron Garan noted that Gagarin's flight and the first shuttle launch were byproducts of a space race between two superpowers, the United States and the Soviet Union. That competition has evolved into a space station program where engineers and astronauts from 16 nations work together.

"You look at us today ... representing all of the nations, really. And you see where we've come," he told reporters from the space station.

Russia spent Tuesday celebrating its Gagarin's space accomplishment in 1961. It was another 23 days before American Alan Shepard became the second man in space.