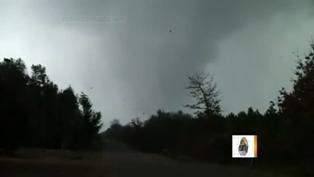 MAPLETON, Iowa (AP) -- Authorities say the 15 minutes of warning given to residents of a small Iowa town were key to preventing any deaths or serious injuries when a tornado destroyed more than half the community.

The storm barreled through Mapleton on Saturday night with winds of more than 130 mph. But the worst injury was a mere broken leg.

Sheriff Jeff Pratt says he and his deputies, along with trained storm spotters, tracked the twister across the countryside and notified communities in its path to blow their warning sirens earlier than usual. That let people scramble into basements or seek other shelter.

About 100 homes were destroyed.

On Monday, volunteers streamed into town to begin cleaning up downed trees and rubble.