Video: 2012 in Sight, Obama Looks Back to Chicago Again 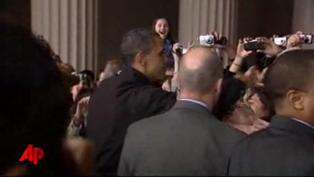 CHICAGO (AP) -- President Barack Obama's relationship with his hometown may be best described as a long-distance love affair. He lavishes attention on it from afar and proud Chicago pines for its hometown hero, though the two rarely see each other.

Obama is returning to his roots as he embarks on his re-election race for 2012. He's setting up his campaign headquarters in a downtown high-rise near Grant Park, the site of his victory celebration on election night in November 2008.

He's coming back Thursday to raise money, a week after launching his second White House bid with an understated email and online video.

The president is putting Chicago in the spotlight again as he tries to recreate the grass-roots, start-up flavor of his first campaign and do what no incumbent president has done in decades: try to win re-election from a location outside Washington.

A Chicago base also could reinforce a connection to a city that aides say keeps Obama grounded while he lives in the nation's capital.

Obama's advisers hope a Chicago location could insulate his campaign from some of the Washington chatter and news leaks that often plague campaigns. A beyond-the-Beltway headquarters could allow them to offset the notion that Obama, who campaigned as an outsider above the partisan fray and promised a new approach to politics, has become the ultimate political insider.

"Basing it in Chicago says, 'I'm not of Washington,' but if he doesn't spend time in Chicago, he is of Washington," said Paul Light, a public service professor at New York University.

Obama's relationship with his town has evolved over the years.

He was a community organizer, worked on a major voter drive and practiced law in his early days in the city. When he entered politics, he focused on the state capital of Springfield, and cast himself as above the brass-knuckled nature of Chicago politics, whose history is pockmarked with corruption and scandal.

During the 2008 campaign, Obama was a fixture in Chicago when he wasn't crisscrossing the country for votes. He took his wife, Michelle, around town to dinner at some of the city's best restaurants. He hung out with his daughters. He worked out at the gym. He played basketball with his buddies. He attended meetings at his campaign office, all under the watchful eye of reporters and Secret Service agents. His family, friends and neighbors talked openly about the candidate and his lifestyle.

As president, Obama has made only about a half a dozen visits to Chicago, often to raise money for candidates. He's made only a few overnight trips to his South Side house.

His neighbors don't seem to hold it against him.

"He's got a whole world to deal with," says Hosea McKay, a 73-year-old retired substance abuse counselor, who lives several blocks away. "Chicago . we can't be so egotistical that we think he's supposed to pop in every three or four months and hang out with us."

The area around Obama's house looks much like it did during the last campaign when extra security measures were added. Even when Obama isn't there, guards and barriers - both metal and concrete - restrict access to his street. His house can be seen through some trees from a nearby busy thoroughfare.

But the neighborhood has changed somewhat since the Obamas left. They're getting new neighbors because the home next door to theirs was sold last year.

While sharing a neighborhood with the president has its share of hassles, Prince Ella Murphy, who lives about a block away, doesn't mind, especially when it comes to the security that increases when Obama is in town.

"I love it. I feel protected because, I mean, they have police everywhere," said Murphy, a 61-year-old retired hotel worker.

Over the past two years, the Obamas have devised ways not to be homesick. They've brought Chicago to them in Washington.

They tapped into their network of hometown connections when they moved into the White House. Among those who relocated to Washington with the Obamas were friend Valerie Jarrett, now a White House adviser, and the family's personal chef. Obama's Chicago buddies, Eric Whitaker and Marty Nesbitt, are constant vacation companions. Countless Chicagoans have visited the White House over the past two years.

The president hosted the 2010 Stanley Cup winners, the Chicago Blackhawks at the White House, last month and put the city's other professional teams on notice. He said: "Let me just say to all the Bears fans, Bulls fans, White Sox fans, and Cubs fans, I want to see all of you sometime soon, as well."

He also swapped one chief of staff from Chicago for another. Rahm Emanuel is Chicago's mayor-elect, while Bill Daley, the current mayor's brother, joined the White House as part of a staff reshuffling aimed at getting ready for the campaign.

While Axelrod said more presidential visits are likely, given that the campaign headquarters is in Chicago, just how much time Obama and his family will spend in Chicago this time is unclear. The duties of the presidency don't lend themselves to much down time.

His team is setting up shop in a downtown high-rise not far from offices the Obama operation used in 2008. Campaign manager Jim Messina, a former White House deputy chief of staff, is directing the effort, and Axelrod is certain to be a constant presence.

"It's nascent group and it's going to grow," said Axelrod, who stopped by the offices recently. "You could sense, you could feel some of that old excitement coming back and you know people are really eager to get going."

Some are hoping to see Obama, himself, more.

Says Freddie Fitch, 53, who lives just a few blocks from the Obamas, "We love him here."