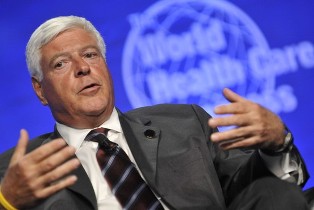 The Securities and Exchange Commission said Friday that the company settled the charges with the agency and the Justice Department without admitting or denying guilt.

The government accused J&J subsidiaries of providing money and travel gifts to doctors in Greece, Poland and Romania in exchange for their prescribing J&J products to patients. The SEC says J&J agents used fake contracts and sham companies to deliver the bribes. The SEC says the bribes began at least 13 years ago.

The charges are the latest in a series of issues that have battered the company's household image. In the past year, the company has had to recall over-the-counter medicines - such as Children's Tylenol and Benadryl - contact lenses and orthopedic hips. Last month federal health regulators took legal control of the plant where millions of bottles of defective medication were produced.

J&J said it has cooperated with the Department of Justice on its criminal investigation since 2007. It alerted the U.S. government to the medical device kickbacks and identified similar violations across multiple businesses over the next three years, it said.

"We went to the government to report improper payments and have taken full responsibility for these actions," said William Weldon, Chairman and CEO of J&J. "I know that these actions are not representative of Johnson & Johnson employees around the world who do what is honest and right every day."

A spokeswoman for the company added that none of the employees cited in the charges are currently employed by J&J.

The company will pay $21.4 million in criminal penalties for improper payments and return $48.6 million in illegal profits, according to the government.

Department of Justice officials said penalties against the company were reduced because J&J cooperated with investigators.

"We are committed to holding corporations accountable for bribing foreign officials while, at the same time, giving meaningful credit to companies that self-report and cooperate with our investigations," said Mythili Raman, a deputy assistant attorney with the Department of Justice.

In a separate announcement, United Kingdom regulators said they reached a $7.9 million settlement with J&J over illegal payments made to orthopedic doctors in Greece. The U.K.'s Serious Fraud Office said it launched its investigation in 2007 after receiving information about the payments from U.S. authorities.

Under terms of the U.S. settlement, J&J must put in place a program to make sure it complies with anti-bribery laws across its businesses. The plan includes the creation of several new positions, including a chief compliance officer who will report to the company's board of directors. J&J must update the government on the plan every six months.

The charges against J&J were brought under the Foreign Corrupt Practices Act, which bars publicly traded companies from bribing officials in other countries to get or retain business. In the past five years, the Justice Department has investigated several companies that sell medical devices in foreign countries for violating the law.

Industry experts say giving gifts and payments to doctors is not uncommon among drug and medical device companies who operate in dozens of countries.

"Partly because it's the only way to play in some markets and partly because big pharma companies are under intense revenue pressure and non-U.S. markets are the final growth frontier," said Erik Gordon, a former drug industry executive and professor at the University of Michigan's school of business.