Video: Time's Up As Obama and GOP Scramble to Halt Shutdown 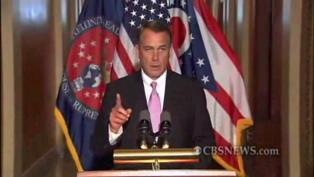 WASHINGTON (AP) -- With the clock ticking to a partial government shutdown at midnight, the top Democrat in the Senate said Friday that the White House and Republicans have agreed on a spending cut of $38 billion but a fight over federal dollars for Planned Parenthood is blocking a deal.

Senate Majority Leader Harry Reid told reporters he was cautiously optimistic after late night talks at the White House, but the budget dispute also has become a moving target. Reid said that in addition to agreeing on the spending cut, negotiators had worked out policy disputes that involve environmental protection, implementing President Barack Obama's health care law and regulating the Internet.

But the Nevada Democrat said his party is holding the line on a plan to cut Planned Parenthood off from federal money.

"That is an issue, as the president said last night, that we are not bending on," Reid said.

Failure to reach an agreement moved the government closer to a midnight shutdown that all sides say would inconvenience millions of people and damage a fragile economy.

In brief remarks, House Speaker John Boehner called on the White House and Senate Democrats to pass a one-week stopgap bill that would fund the Pentagon for six months, cut spending by $12 billion and keep the government operating. The House passed the bill on Thursday.

"This is the responsible thing to do to support our troops and keep our federal government open," the Ohio Republican told reporters. He took no questions.

Republicans and Democrats failed to reach a consensus in middle-of-the-night talks in the Capitol.

Republicans said the principal hang-up in the negotiations centered on the size of the spending cuts to be included in any deal to fund the government through September, when the current budget year ends. But Democrats said the GOP's demands on social issues, including denying federal dollars for Planned Parenthood, were at the heart of the deadlock.

Barring an agreement or perhaps another temporary bill to keep the government operating, the shutdown of most of the government would begin at midnight. Many essential workers, such as mail carriers, air traffic controllers and the military, would stay on the job.

It was unclear whether the top leaders in Congress, Reid and House Speaker John Boehner, R-Ohio, would return Friday to the White House, where they met with Obama three times in the past two days.

Democrats said the deadlock was all about a GOP demand to deny federal dollars for Planned Parenthood, which uses the taxpayer money to offer contraception and health care for women. Planned Parenthood is the nation's largest provider of abortion assistance. Democrats asserted that House Republicans were holding out for getting some language to restrict abortion and suggested the GOP might accept a deal on a different abortion-related measure instead, such as an effort to restrict U.S. aid to overseas family planning groups that perform abortion.

But Michael Steel, a spokesman for Boehner, said Friday that "the largest issue is still spending cuts."

Obama said ominously that the machinery of a shutdown was already in motion.

"I expect an answer in the morning," Obama told reporters Thursday evening as representatives from the White House and Capitol Hill plunged ahead with negotiations into the night.

The aides were trying to cobble together a deal on how much federal spending to slash, where to cut it and what caveats to attach as part of a bill to fund the government through Sept. 30. A temporary federal spending measure expires at midnight Friday.

As the pressure mounted, Obama abruptly postponed plans to promote his agenda in Indiana on Friday.

For a nation eager to trim to federal spending but also weary of Washington bickering, the spending showdown had real implications.

A closure would mean the furloughs of hundreds of thousands of workers and the services they provide, from processing many tax refunds to approving business loans. Medical research would be disrupted, national parks would close and most travel visa and passport services would stop, among many others.

Obama spoke after a double-barreled day of meetings with Boehner and Reid. The three have held four such meetings this week.

Throughout Thursday, the president, Reid and Boehner bargained and blustered by turns, struggling to settle their differences while maneuvering to avoid any political blame if they failed.

With the economy just now beginning to create jobs in large numbers, the president said a shutdown would damage the recovery.

"For us to go backwards because Washington couldn't get its act together is just unacceptable," he said.

Republicans passed legislation through the House at midday to fund the Pentagon for six months, cut $12 billion in domestic spending and keep the federal bureaucracy humming for an additional week.

"There is absolutely no policy reason for the Senate to not follow the House in taking these responsible steps to support our troops and to keep our government open," Boehner said.

Obama flashed a veto threat even before the bill passed on a 247-181, mostly party-line vote. The administration issued a statement calling it "a distraction from the real work" of agreeing on legislation to cover the six months left in the current fiscal year, and there was no indication Reid would allow a vote on it.

As they left the White House after the evening meeting, Reid and Boehner issued a brief written statement that said they had narrowed their disagreements and said they would "continue to work through the night to attempt to resolve" the remaining ones.

On Friday morning, House Minority Whip Steny Hoyer, D-Md., said that talks have progressed "70 percent of the way on the numbers," but said the two sides are still squabbling about Republican riders to the legislation that would change abortion and environmental policy.

"There's no deal yet," he said on NBC's "Today" show. Hoyer blamed Republicans, saying that "when we were in charge of the House and had disagreements with George Bush, we compromised." He said he's "embarrassed" that Congress has put the country on the brink of shutdown, calling it "inappropriate."

Republicans want deeper spending cuts than the Democrats favor and also are pressing for provisions to cut off federal funds to Planned Parenthood and stop the Environmental Protection Agency from issuing numerous anti-pollution regulations.

"They're difficult issues. They're important to both sides and so I'm not yet prepared to express wild optimism," the president said.

For all the brinksmanship - and the promise of more in the Senate on Friday - there was agreement that a shutdown posed risks to an economy still recovering from the worst recession in decades.

The political fallout was less predictable, especially with control of government divided and dozens of new tea party-backed Republicans part of a new GOP majority in the House. Twin government shutdowns in the mid-1990s damaged Republicans, then new to power in Congress, and helped President Bill Clinton win re-election in 1996.

This time, individual lawmakers worked to insulate themselves from any political damage. Sens. Sherrod Brown, D-Ohio, and Ben Nelson, D-Neb., both seeking new terms in 2012, became the latest to announce they would not accept their congressional salary during any shutdown. "If retroactive pay is later approved, I'll direct my part to the U.S. Treasury," Nelson said. Some two dozen senators of both parties scurried to make similar pledges.

One day before the shutdown deadline, events unfolded in rapid succession.

In a shift in position, Obama said he would sign a short-term measure keeping the government running even without an agreement to give negotiations more time to succeed.

At the White House, a senior budget official said the impact of a shutdown "will be immediately felt on the economy."

For all the tough talk, it did not appear the two parties were too far from a deal.

Officials in both parties said that in the past day or so, Democrats had tacitly agreed to slightly deeper spending cuts than they had been willing to embrace, at least $34.5 billion in reductions.

Agreement on that point was conditional on key details, but it was a higher total than the $33 billion that had been under consideration.

It also was less than the $40 billion Boehner floated earlier in the week - a number that Republicans indicated was flexible.

There also were hints of Republican flexibility on the ban they were seeking to deny federal funds to Planned Parenthood. Officials said that in talks at the White House that stretched on after midnight on Wednesday, Republicans had suggested giving state officials discretion in deciding how to distribute family planning funds that now go directly from the federal government to organizations such as Planned Parenthood.

That would presumably leave a decision on funding to governors, many of whom oppose abortion, and sever the financial link between the federal government and an organization that Republicans assail as the country's biggest provider of abortions.