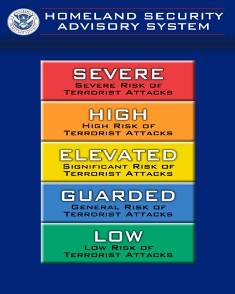 WASHINGTON (AP) -- The U.S. government's new system to replace the five color-coded terror alerts will have two levels of warnings -- elevated and imminent -- that will be relayed to the public only under certain circumstances for limited periods of time, sometimes using Facebook and Twitter, according to a draft Homeland Security Department plan obtained by The Associated Press.

Some terror warnings could be withheld from the public entirely if announcing a threat would risk exposing an intelligence operation or an ongoing investigation, according to the government's confidential plan.

Like a gallon of milk, the new terror warnings will each come with a stamped expiration date.

The 19-page document, marked "for official use only" and dated April 1, describes the step-by-step process that would occur behind the scenes when the government believes terrorists might be threatening Americans. It describes the sequence of notifying members of Congress, then counterterrorism officials in states and cities and then governors and mayors and, ultimately, the public. It specifies even details about how many minutes U.S. officials can wait before organizing urgent conference calls among themselves to discuss pending threats. It places the Homeland Security secretary, currently Janet Napolitano, in charge of the so-called National Terrorism Advisory System.

The new terror alerts would also be published online using Facebook and Twitter "when appropriate," the plan said, but only after federal, state and local government leaders have already been notified. The new system is expected to be in place by April 27.

The government has always struggled with how much information it can share with the public about specific threats, sometimes over fears it would reveal classified intelligence or law enforcement efforts to disrupt an unfolding plot. But the color warnings that became one of the government's most visible anti-terrorism programs since the September 2001 attacks were criticized as too vague to be useful and became fodder for late-night talk shows.

The new advisory system is designed to be easier to understand and more specific, but it's impossible to know how often the public will receive these warnings. The message will always depend on the threat and the intelligence behind it.

For example, if there is a specific threat that terrorists were looking to hide explosives in backpacks around U.S. airports, the government might issue a public warning that would be announced in airports telling travelers to remain vigilant and report any unattended backpacks or other suspicious activity to authorities.

If the intelligence community believes a terror threat is so serious that an alert should be issued, the warning would offer specific information for specific audiences. The Homeland Security secretary would make the final decision on whether to issue an alert and to whom - sometimes just to law enforcement and other times to the public.

According to the draft plan, an "elevated" alert would warn of a credible threat against the U.S. It would not likely specify timing or targets, but it could reveal terrorist trends that intelligence officials believe should be shared in order to prevent an attack. That alert would expire after no more than 30 days but could be extended.

An "imminent" alert would warn about a credible, specific and impending terrorist threat or an on-going attack against the U.S. That alert would expire after no more than seven days but could be extended.

There hasn't been a change in the color warnings since 2006, despite an uptick in attempted attacks and terror plots against the U.S. That's because the counterterrorism community has found other ways to notify relevant people about a particular threat. In December 2010, intelligence officials learned that a terrorist organization was looking to use insulated beverage containers to hide explosives. That information was relayed to the aviation industry to be watchful. Less formal warnings like that will continue under the new system.

In the past, there was no established system for determining whether to raise or lower the threat level, said James Carafano, a national security expert at the Heritage Foundation, a conservative Washington think tank. In part because of this, travelers heard about nonspecific orange threats in airports since August 2006 when the government responded to an al-Qaida plot to detonate liquid explosive bombs hidden in soft drink bottles on aircraft bound for the United States and Canada.

While there was coordination among U.S. counterterrorism officials about the threat, "It was pretty much kind of a gut call," said Carafano, who was on a 2009 advisory committee to review the color alerts and suggest ways to improve them.

According to the draft plan, before an official alert is issued, there is a multi-step process that must be followed, starting with intelligence sharing among multiple federal, state and local agencies, including the FBI, the National Counterterrorism Center and the White House. If the threat is considered serious enough, a Homeland Security official will call for a meeting of a special counterterrorism advisory board. That board would be expected to meet within 30 minutes of being called, and if it's decided an alert is necessary, it would need to be issued within two hours.

"The plan is not yet final, as we will continue to meet and exercise with our partners to finalize a plan that meets everyone's needs," Homeland Security spokeswoman Amy Kudwa said.