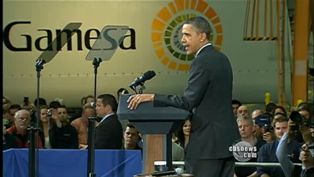 WASHINGTON (AP) -- Short of a deal, congressional leaders bargained and squabbled by turns Thursday on legislation to cut spending and prevent a partial government shutdown that loomed for Friday at midnight.

Before departing the Capitol, Boehner urged the House to pass legislation to cut $12 billion, fund the Pentagon through the end of the year and keep the government running for a week. "There is absolutely no policy reason for the Senate to not follow the House in taking these responsible steps to support our troops and to keep our government open," he said.

At the same time, he accused the White House of backsliding, adding that there hadn't been as much progress as it appeared after a late-night White House meeting. "It's really just more of the same. We're going to have real spending cuts. I don't know what some people don't understand about this," he said.

Reid said otherwise, although he, too, made it clear he wants to avoid a shutdown that the White House says would cause problems for combat troops overseas and delay IRS refunds for taxpayers at home.

"The issue is ideology, not numbers," he said, criticizing Republican proposals to limit the authority of the Environmental Protection Agency and a prohibition of the use of federal or local funds to pay for most abortions in the District of Columbia.

"These matters have no place on a budget bill," he said.

Obama has expressed opposition to the week-long interim measure, and Rep. Norm Dicks, D-Wash., said the president would veto it. It's unlikely to get that far - Reid has labeled it a non-starter, as well.

Despite Reid's assertion that the two sides had largely agreed on spending cuts, Boehner said partial agreements were not possible.

It was unclear how much the talks had narrowed the differences on spending. Boehner recently floated $40 billion, more than the $33 that the negotiators had adopted as a framework, but less than the $61 that was contained in a bill the House cleared than six weeks ago.

Obama emerged from the negotiations late Wednesday night to declare that differences between Republicans and Democrats had narrowed somewhat. But at this point, only urgent action can avert a shutdown of much of the government at midnight Friday, he said.

"It's going to require a sufficient sense of urgency," Obama said, "to complete a deal and get it passed and avert a shutdown."

Even a brief shutdown could affect a wide range of Americans, from troops fighting abroad who are awaiting their pay to tourists planning trips to national parks.

The move by Boehner to advance a one-week interim budget measure angered his Democratic negotiating counterparts and came after negotiations at the White House moved slower than had been hoped.

Obama told reporters that his differences with the House Republicans were narrowing but not resolved.

"I thought the meetings were frank, they were constructive, and what they did was narrow the issues and clarify the issues that are still outstanding," Obama said. "I remain confident that if we're serious about getting something done, we should be able to complete a deal and get it passed and avert a shutdown. But it's going to require a sufficient sense of urgency from all parties involved."

Boehner's move appeared aimed at shifting political blame if a shutdown occurs, but the announcement of Thursday's vote angered Democrats who felt talks were progressing.

It's also about the last piece of leverage Boehner has - using the Pentagon budget to put political pressure on Democrats and to seek to blame them for a shutdown. But after a shutdown, Boehner's options appear to become more limited.

"I have yet to talk to anybody, member or staff, who's been able to explain to me how Boehner's leverage increases during a shutdown," said GOP lobbyist Jack Howard, who worked for Speaker Newt Gingrich during the last shutdowns in 1995-96.

Democrats also said privately that the White House was infuriated after Rep. Jeb Hensarling, R-Texas - the No. 4 House Republican - accused Obama of leaving the talks to focus on his re-election campaign in official appearances in Pennsylvania and New York City.

Obama had already ruled out the weeklong measure Republicans intend to push through the House, and Senate Democrats have labeled it a non-starter. Republican officials said the details of the bill could yet change. But passage of any interim measure is designed to place the onus on the Democratic-controlled Senate to act if a shutdown is to be avoided.

At issue is legislation needed to keep the day-to-day operations of federal agencies going through the Sept. 30 end of the budget year. A Democratic-led Congress failed to complete the must-pass spending bills last year, setting the stage for Republicans assuming power in the House in January to pass a measure with $61 billion in cuts that even some GOP appropriators saw as unworkable. It was rejected in the Democratic-controlled Senate.

Separately Wednesday, the White House used its unmatched megaphone to emphasize the stakes involved in the negotiations, arranging a briefing for the presidential press corps on the ramifications of a partial government shutdown.

The officials who spoke did so on condition of anonymity, under rules set by White House aides eager to apply pressure to congressional negotiators.

The officials said military personnel at home and abroad would receive one week's pay instead of two in their next checks. Among those affected would be troops in Iraq, Afghanistan and the region around Libya.

Tax audits would be suspended - welcome news to some, no doubt - but there were unhappy tidings for others. Income tax returns filed on paper would pile up at the IRS, and refunds would be delayed as a result.

National parks would close, as would the Smithsonian Institution and its world-class collection of museums clustered along the National Mall within sight of the Capitol. Officials were less clear about the Cherry Blossom Festival, scheduled for this weekend in Washington.

As for the broader talks, it appeared progress had been made on spending cuts demanded by Republicans, though Democrats warned that a series of unrelated GOP policy provisions remain unresolved.

Democrats have already ruled out agreeing to stop funding the year-old health care overhaul or to deny Planned Parenthood all federal money. And Reid has said he will not agree to any of the curbs Republicans want to place on the Environmental Protection Agency.

While the political wheels turned, hundreds of demonstrators rallied outside the Capitol, calling for budget cuts and a shutdown, if necessary, to get them.

"Shut the sucker down," one yelled, and the crowd repeatedly chanted, "Shut it down."