Diversity and democracy was on the minds of students in Jefferson High School's advanced placement in history class Monday. The class held a "voting party" to help people with their ballots and to raise awareness about the importance of voting. Ready to welcome people into the library, where the party was held, are LaToya Spencer (in back), 16, and Jacqueline Mitchell (front), 16.

Details
Written by Brian Stimson of The Skanner
Published: 08 November 2006 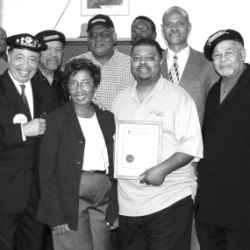 Starting out with no official office and no budget, the Portland chapter of the National Association of Black Veterans is officially open. The association will place an emphasis on helping Black veterans and their families navigate the numerous benefits available from the Veteran's Administration.

Details
Written by Brian Stimson of The Skanner
Published: 08 November 2006

From a gangster who could have had an academic future, to the current misperception of the students at Jefferson High School, two documentaries playing at the NW Film Center's 33rd Film & Video Festival will highlight different stories about life and history in areas of North Portland.
Both films will show on Nov. 13 at the Whitsell Auditorium at the Portland Art Museum, 1219 S.W. Park Ave. "Reading Between the Lines" will begin at 7 p.m., and admission is free.
"Killingsworth" will show at 8 p.m. Admission is $7 general; $6 for members, students and seniors.

Schools and natural spaces win, but campaign financing is a toss-up

Voters were in a generous mood Tuesday when they approved ballot measures for the Portland Public Schools and for preserving natural spaces in the metropolitan area. But their message was mixed in other ballot measures.

Cleveland High School student Malcolm Anderson practices a monologue from the 2006 Rough Eagles performance of "Native Sons and Daughters" Nov. 6 at the Intiman Theatre. The Rough Eagles are a group of Cleveland and Roosevelt High School students who collaborated on a theatrical response to a play in Intiman's American Cycle Series.  The current production of The American Cycle is Richard Wright and Paul Green's play "Native Son." The students draw from their own personal experiences.

Rice May Be Nice for Schools, Supporters Say

Board members still committed to a national search

Former Seattle Mayor Norm Rice has been suggested as a possible replacement for Seattle Public Schools Superintendent Raj Manhas, who is leaving after four years as head of the district.
Manhas announced late last month that he will step down at the end of the school year. He has been widely criticized in trying to erase a $35 million budget deficit in part by closing and consolidating schools.
Manhas on Saturday said he was not being forced out.
"I have every intention of fulfilling my contract, which ends in August 2007," said Manhas, 55. "My direction comes from the school board."

Large crowds cause ballot shortage in some King County precincts

Even record-breaking flooding in some areas could not deter voters in King County Tuesday, who turned out in greater-than-expected levels countywide, leading to ballot shortages in some polling locations.
Although elections officials expected only a 20 percent turnout of poll voters, they prepared each polling place with enough materials for a 60 percent turnout. Still, workers in 55 polling places ran short of ballots and provisional ballots for some precincts.
Based on long-standing procedures for how to deal with running out of both regular and provisional ballots, poll workers provided several options to make sure every voter had a chance to cast a ballot.

Allison Skahan, 15 and Julia LaVallie, 14, both of Glenwood, Wash., talk about Spelman College with Kristin Wyckoff, assistant director of admission and orientation services for Spelman during the Portland National College Fair.