Irma Thomas, the "Soul Queen of New Orleans," will sing "The Star Spangled Banner" during the fireworks show following the final performance of the Waterfront Blues Festival on July 4.
Thomas will bring her southern warmth and gospel-tinged voice to the festival at 8:45 p.m. and will close with the festival's grand finale, the national anthem, at 10 p.m. as the fireworks display begins.
Thomas not only lost her home but also her famed New Orleans club, The Lions Den, in the wake of Hurricane Katrina.
Admission to the 2006 Safeway Waterfront Blues Festival, which includes the fireworks show, is a donation of $8 and two cans of food. Every dollar donation enables Oregon Food Bank to collect and distribute more than $7 worth of food.
Western Display Fireworks will produce the fireworks display, with Bob Gobet, company owner, as the lead pyrotechnician. The three-generation company from Canby has been producing fireworks shows for 57 years in the Northwest and around the United States. 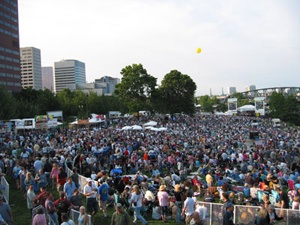 The largest Fourth of July show in Oregon, the Waterfront Blues show, accompanied by music, will open with shots from three barges at once. The first volley will consist of 20 Diamond Screamer Mines, followed by 15 2-3/8-inch red, blue and green Diamond Screamer candles fanned across the sky with thundering Titanium Salutes, Purple Strobe and Diamond Screamer shells breaking above.
This opener transitions into barrages from three locations of Tourbillion Night, Purple-Blue-Green with Tourbillion, Whistling Dragon and Two-Layer Pyro Mine with Thunders, as complementing shells — in brilliant, colorful effects — fill the sky in multi-tiered levels. The opening song is about two minutes and 15 seconds in length, and will consist of 1,434 pyrotechnic effects.
The main body of the show will contain hundreds of effects such as Majestic Arching Transformation, Twinkling Kamuro, Crossette, Gold Rain, Sapphire Blue Cascade, Lemon and Glitter Palm Core, Silver Whirl and Report, Silver Wasp and Green and White Strobe Flitter and Fuchsia.
The grand finale will be fired from three locations and will transition through six, stunning color-changing thundering stages as it builds and builds to gigantic explosions of brilliant, trailing colors, strobes and thundering salutes.
The fireworks will fire from a barge on the Willamette River between the Hawthorne and Marquam bridges.
Those watching the fireworks off-site from the festival can tune into KINK FM 102 to hear a simulcast of the soundtrack.