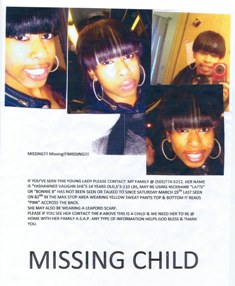 Family and friends of a missing 14-year-old are desperately looking for information that might lead them to the whereabouts of the young girl.

Yashawnee Vaughn, a student at Helensview School, was last seen at around 7 p.m. on Saturday, March 19, at the number 72 TriMet bus stop at Thompson Street and 82nd Avenue near Madison High School.

She is an African American about 5'2" tall, weighs 115 pounds and her hair is usually shoulder length.

Her mother Shaquita Louis told The Skanner News that she was on her way to visit with a close friend, but failed to show up. In the hours before her disappearance, she had met with a male friend at the Taco Bell at Thompson and 82nd Ave., eaten dinner and departed the restaurant.

She said family friends saw her waiting at the bus stop minutes before she made her last phone call.

The friend she was supposed to meet, Shawndrea Farve, says it's completely unlike Vaughn to disappear. The two girls are close, talking every day. Farve says Vaughn would have told her if she was running away with someone or if something was wrong. Farve said the boy Vaughn met at the Taco Bell is known to her.

Louis says that Vaughn's last phone call – according to her cell phone records – was made to Farve.

"We were laughing and talking," Farve said.

Farve was in Vancouver about to get on the number 4; Vaughn said she was waiting for the 72, and they hung up. It was then that Farve realized they hadn't set up a meeting spot. So she called back.

According to her mother Louis, the cell phone company says the phone hasn't been used since. Neither has Vaughn's Facebook page, which relatives and friends say was used constantly by the teen. Farve said they've contacted every single one of Vaughn's friends and family and no one has seen or heard from her since Saturday night.

It's unclear what the Portland Police Bureau has uncovered. Calls and emails weren't returned by press time.

Louis says a detective told her she had probably run away because Vaughn had done so a year before. But Louis says that incident was resolved without Vaughn ever leaving their sight. The girl had left the house in a huff after an argument and a squad car intercepted her down the street. This time around, there had been no argument and the "girly girl" wasn't carrying an overnight bag with her. Louis said the officer also referenced her theft and TriMet fare evasion citations as reasons she might be a runaway.

Louis said a different officer contacted her on Thursday, March 24 and said he would be on the lookout for the missing teen.

A rally was held Thursday afternoon by friends and family

Anyone with information about Yashawnee Vaughn should call 503-774-5212.