She's been called the female Tyler Perry. But comedian and writer Mary Liz Paige admits she has a ways to go before living up to that moniker.

On April 1 and 2, Paige brings her critically acclaimed gospel comedy "Let's Talk Church" to Portland's Winningstad Theatre, 1111 SW Broadway. Tickets are available at the PCPA Box Office at the Winningstad or 503-248-4335 or at ticketmaster.com 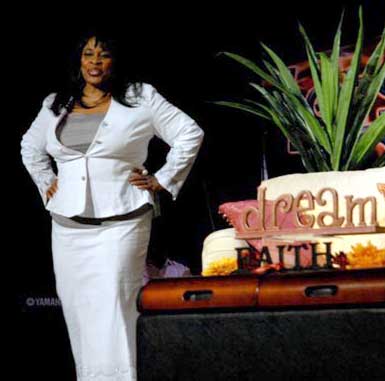 In the play, Paige takes on the central role as the reformed pole-dancer turned talk show DIVA (Devoted Inspirational Victorious Attitude) who is taking over Oprah's prime television slot. Throughout the show, the Diva encounters a number of different personalities from the church in need of redemption – the married deacon who loves to feel on women, the mentally ill schizophrenic who hears voices, someone desperately reluctant to change and the woman who loves to dress up in glitter but who has no glory.

"Eventually they have to go up to the upper room, in some talk shows they call them makeovers, where they get fully delivered, and we have Dr. O. Phila, you have to have a psychologist to help them, so when they come back after the commercial, the intermission, you see they're all changed," Paige said.

Helping Paige bring the play and the original cast up from Southern California is Renaissance Man Baruti Artharee, who also acts as Paige's co-host in the play. Artharee is probably best known for his business work as president of Coast Industries, deputy director of the Portland Development Commission, and regional director for diversity at Providence Health Systems.

Artharee can now add 'actor' to his list of accomplishments. He says he happened upon the opportunity at his Compton High School reunion, where he and Paige were once classmates, and where Artharee was known at that time by a different name – Billy Hutchins.

"It was at that reunion that she was giving out this card letting folks know about the play she had done … I became very intrigued when I learned her play had a Christian-based theme to it, it was a comedy, it was funny and it was also a story of inspiration that a person can have a dream and achieve that dream," he told The Skanner News. "I also thought it paralleled Liz's personal story in some ways about how she overcame certain challenges where she was writing and producing her own plays." 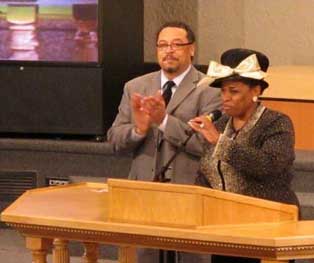 Although it has been over 30 years since Artharee changed his name in an affirmation of his African cultural roots, many in Compton, Calif. still knew him as Hutchins. So his turn on the playbill gets both names credited, and lets his Portland friends in on his long lost – although benign – secret.

He brought Paige up to Portland in January to attend Highland Christian Center and The Skanner News Martin Luther King Jr. Breakfast to help gauge interest in the play. Artharee says that Portland needs more ethnic productions and could see more if enough people turn out for support.

"It was inspired by God," Paige says. "I started out years ago doing skits, 7-minute and 10-minute skits. I was tired and wanted to grow. And decided to do a one-woman show."

Sitting in church, she decided to ask for help from the congregants for different characters. With a background as a corporate trainer, being in front of an audience was natural for her.

In November of 2009, she performed what she thought was going to be a one-time gig.

"And then people heard about it and said, 'we missed it' so we did it again and then we moved it to the Inland Empire twice," she said.

After that, the play was on a roll.

Paige says she created it to make comments on the everyday things that go on in the Black church, as well as the people's relationship with God, the "fakism" in the church that needs to stop and how people can always be delivered.

"You might see yourself," she said. "and if you see yourself, just look straight ahead, don't say anything to anybody. You might see people you know, that's like that in the church and when you hit those people, that's why everybody is like, 'yeah, that's a member in my church, that's my mother.'"

At heart, Paige is a people watcher. Whether she's in the mall, the airport or a house of worship, Paige is always observing the characters around her.

"I sit in church and I make up their names," she said.

She says she's constantly making up new names and characters to include in her shows.

Sister Sparkles, Deacon Delicious, Rejocekia are only the beginning. With little additional cost to add different characters to "Let's Talk," Paige is always changing the show.

"All I need is a sofa and chairs and we sit and we dialogue," she said.

In scene 4, it isn't unheard of to grab a guest or two from the audience.

The fiction in the play has gotten a little close to reality for many audience members. Although Oprah is actually ending her longtime show this year, Paige is only taking over the time slot in fantasy land.

Artharee said that when the main character talks about being a redeemed pole dancer, many in the audience thought that Paige herself had once been an exotic dancer.

"People were confessing to me that Sunday," she said.

When Paige went to make her play into a DVD, people in the studios didn't know what to make of the genre. Not only are there very few male gospel comedians, Paige may be the only woman in her line of work.

"I think a lot of things I couldn't say over the pulpit, but I could say over the stage. Now is the time for it … I do say it with finesse and caring. I'm just saying what's real. They agree with me. It's not slander or anything."

Not that some jokes haven't been controversial. On the DVD, she does a joke about the White Church vs. the Black Church.

"Nothing's wrong with either one, we just have different styles," she said. "How they acknowledge their wives, in the White Church, they might say oh there's my wife Suzie over there, stand up Suzie, she waves, she's the mother of my three children. In the Black Church, 'Get up you foxy woman!' They say she's the sugar in my cereal!"

Paige says she makes sure to try and laugh with people, not at them. And she also makes sure her jokes are true, which makes them funnier, she says.

For more information about Paige Productions and her business, Resolutions, a training and development company, visit www.lizpaige.org or www.paigemeproductions.com