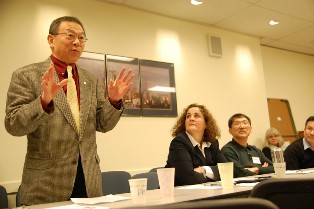 A budding network of ethnic media from around the Pacific Northwest gathered in Seattle Friday, March 18, for the Sea Beez Best Business Practices Roundtable at the offices of public radio station KUOW.

Dozens of newspaper, television, online and radio networks attended the event to talk about how to work together in developing better local news reporting that reaches more people.

Sea Beez is a new project in community reporting using the "hive" model of organizing, developing and training within the participating organizations, as well as encouraging citizen reporting.

Media members can upload their local stories to the www.SeaBeez.com website, where readers can access information about a range of local communities around the Seattle region.

Sea Beez was created in May of 2010 by founder and director Julie Pham, in cooperation with New America Media, the largest nonprofit ethnic media partnership organization in the United States. Pham is also managing editor of the Northwest Vietnamese News in Seattle.

"I work at a Vietnamese newspaper and we're a small business -- we can't serve our readers if we don't survive as small businesses," Pham says.

"There are organizations that aggregate news and try to share content, but what makes Sea Beez different is about capacity – training and workshops aimed at letting ethnic media get better at their craft."

For more information go to www.seabeez.com.