Amalia Alarcón will be the new director of the city of Portland's Office of Neighborhood Involvement.
Appointed by Mayor Tom Potter, Alarcón served as interim director after Jimmy Brown was appointed manager of the Portland Water Bureau's community outreach and customer services group in January. She assumes her new duties immediately.
"Amalia has established excellent rapport with neighborhood associations, community organizations and city staff in her seven years with the bureau and in her tenure as interim director," Potter said.
"I am thrilled to have her lead this critically important organization as we work to expand civic engagement at all levels of community decision making."
Alarcón has served as director of the office's Metropolitan Human Rights Center and as program manager for the Neighborhood Resource Centers.
At the Office of Neighborhood Involvement, she has provided support to neighborhood coalitions and associations; handled civil rights referrals, coordinated immigrant and refugee services and worked closely with the City Council and Multnomah County Board of Commissioners. She also was responsible for the development and monitoring of affirmative action goals.
Alarcon previously worked for the Oregon Health Division, Planned Parenthood and as director of the children's care program of Northern Lights Alternatives in New York.
The announcement followed an intense, six-month recruitment and interview process that concluded with two community forums and interviews with Potter. More than 45 people applied for the position. 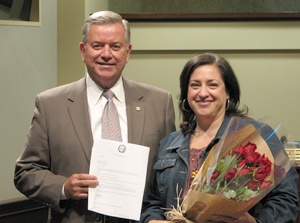