It's ugly, it's destructive and it's everywhere. Graffiti is a problem that goes well beyond the frustration of the property and business owners who have become victims.
"Graffiti has a dramatic effect on just about everything," said Officer Matt Miller, graffiti investigator for the Portland Police Bureau. "Ninety-nine percent of the victims I've talked to associate it with gangs, and they think their neighborhood is being taken over."
The city of Portland spends about $250,000 a year in graffiti clean-up, "which isn't near enough to get it all," Miller said. Graffiti in an area scares away new businesses and homeowners and also potential shoppers. "People think the area is gang-infested and are intimidated," he said.
But according to statistics compiled by the police bureau and Office of Neighborhood Involvement, only 15 percent of the graffiti reported in Portland is gang-related. About 82.5 percent of the reported cases are by graffiti "taggers," or those who do it to compete against other graffiti vandals.
Of the remaining graffiti cases reported to the city of Portland, 1.5 percent are hate/bias related, and the remaining 1 percent are personal messages or were politically driven. Who is doing the tagging? Miller said it's a common myth that taggers are generally youth. According to the statistics, most of the taggers are adults, ranging in age from 18 to 25 years old.
Since Miller has been investigating graffiti cases, there have been more than 1,000 different tags identified and 122 taggers arrested.
"It's a daunting task to handle all these cases," said Miller. "I would speculate that for every one tagger we catch, there are 50 taggers out there just starting out. And once they have one under their belt and they don't get caught, they get more bold and they do it again and again."
Taggers do not discriminate. Marcia Dennis, the graffiti abatement coordinator at the Office of Neighborhood Involvement, estimates that graffiti costs Oregonians $1 million a year in damages.
"Graffiti vandals are equal opportunity criminals," said Dennis, who works with Miller to document all graffiti-related activity in Portland. "They will tag almost every surface. You name it, they'll tag it."
Ted Okrasinski, a volunteer graffiti fighter in his Northeast Portland neighborhood, agrees. "If I were to eradicate all the graffiti in my neighborhood, it would take me two weeks of full-time work," said Okrasinski, a retired financial adviser who began his fight against taggers four years ago.
The Office of Neighborhood Involvement has several volunteers like Okrasinski who help rid communities of graffiti. But even with the help, it's still an ongoing process.
"You have to keep after it," said Okrasinski. "If you don't, it sends a message to the taggers that the neighborhood has lost control and given up." 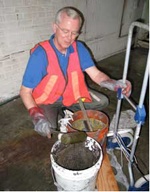 On the law enforcement end, the community is just as important as well. With the police bureau's limited resources, Miller said it will require the community's continued support in catching the taggers.
"Of those taggers caught in the act, most of arrests were because the community acted," he said.

For Portland residents who have become victims of graffiti vandals, help is available.
A program geared toward helping property and business owners get rid of graffiti is offered by the Office of Neighborhood Involvement, and in most cases, it's free of charge. Those who remove the graffiti come from the Youth Employment Institute, a nonprofit youth organization, and Goodbye Graffiti.
Marcia Dennis, the graffiti abatement coordinator at Office of Neighborhood Involvement, supervises the program.
"Without exception, property and business owners feel violated by graffiti vandalism," Dennis said. "They are afraid they're being targeted by a gang, and they are angry. They have somewhere to turn."
For more information about the Office of Neighborhood Involvement's graffiti abatement program, or to learn more about graffiti removal, becoming a volunteer or to report graffiti, go to the city of Portland's Web site, www.portlandonline.com/oni/index.cfm?c=32420.
To report someone in the act of tagging, call 9-1-1.