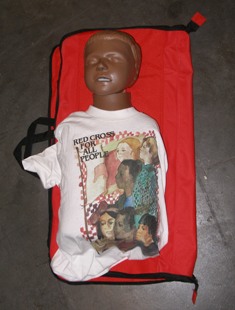 For this year's Red Cross Breakfast of Champions event in Portland, the organization decided to put their focus on earthquakes. If you didn't know any better, one might think the Red Cross organized the annual event in response to the earthquake that struck Japan on Saturday. But no, it was pure coincidence.

"The fact that we had an earthquake in Japan creates a more powerful teachable moment," said Lise Harwin, communications director for American Red Cross, Oregon Trail Chapter. The Skanner News Video: Visit to a Portland Disaster preparedness store
The event is two-thronged: The morning is a breakfast for honorees. The afternoon is a walking tour of a disaster. In a large room of the Oregon Convention Center, students are led through what might otherwise resemble a House of Horrors.

With loud booms and strobe flashes, actors hide under desks to protect themselves as the earthquake hits. In the immediate aftermath, the survivors – and their bloody, gaping wounds – are tended to by their classmates and co-workers. As students are led through the carnage, the community's response to the disaster is spelled out, with firetrucks, Red Cross meal wagons, stretchers and more.

Harwin, said the Japanese quake has made more people start to question about what might happen when a seismic event happens here.

"Oregon is far less prepared than Japan," she said.

Harwin says the Red Cross is – at the very least – trying to impart the most basic aspects of disaster planning on people: Get a kit; Make a plan; Be informed.

The several hundred high school students who were led through the earthquake demonstration engaged in small group discussions about disasters. Bill Taylor, a Red Cross volunteer for 30 years, led one such discussion about the students' preparation and knowledge. How can you survive a disaster, he asked?

"That's not such a great idea," Taylor said. For one, if you get trapped inside, you're dead.

What are some results of previous disasters, he asked. Unlike the response to their favorite disaster films, most of the students didn't really know. Referencing the 1906 San Francisco earthquake and resulting fire (as well as a bubonic plague outbreak), Taylor said it completely changed the way buildings were constructed.

"The way buildings were built back then … they had really bad infrastructure," he said.

See The Skanner's guide for putting together a disaster survival kit on page 6.

Purchase goods a little at a time and it becomes less of a daunting project, she says. These days, the types of survival foods can also cause more delight than disgust – what with freeze-dried favorites such as Astronaut Ice Cream or canned Cougar Gold Cheese from the WSU creamery.

In Oregon, especially Portland, the frequency of disasters can leave many people complacent. In California, where there have been a number of devastating earthquakes and wildfires, people are generally more prepared than in the urban areas of the Pacific Northwest, she says.

If you want to help yourselves and your friends and neighbors prepare for a disaster, Harwin suggested holding a disaster kit potluck. Everyone brings enough of one item to share with the group, that way everyone at the potluck walks away with enough stuff to pack a kit.