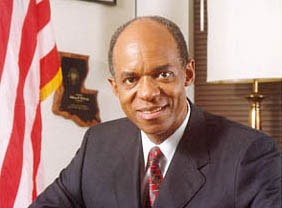 WASHINGTON—Democrats in the House of Representatives, determined to make an election-year point about ethics, have voted to strip Louisiana Rep. William Jefferson of his committee assignment while a federal bribery investigation runs its course.
The rank and file acted despite a last-minute plea by the embattled lawmaker and persistent complaints from the Congressional Black Caucus that there neither rule or precedent for the action. The vote Thursday night was 99-58.
Jefferson has not been indicted and maintains his innocence. In remarks to reporters, he conceded that "serious allegations" swirl around him.
After weeks of defiance, he also left open the possibility that he might at last surrender the seat voluntarily before the issue reaches the House floor for final action. "I don't want to speculate," he said.
The three-hour closed door meeting marked the culmination of a drive by the Democratic leader, Rep. Nancy Pelosi, to take action. "This isn't about proof in a court of law. This is about an ethical standard," she told reporters.
"I wish the White House would follow our lead on this," she added. Demorats have vowed to make ethics a cornerstone of their campaign for control of the House this fall and have repeatedly accused Republicans of presiding over a "culture of corruption."
Congressman James Clyburn, who is a member of the Democratic leadership as well as the Black caucus, said the rank and file had confronted "two competing interests, the legal interest and the political interest."
Earlier, Pelosi brushed aside criticism from members of the Black caucus, telling reporters she had been "more than fair."
The FBI claims that it videotaped the Louisiana Democrat last summer taking $100,000 in bribe money and that agents later found $90,000 of the funds stashed in a freezer in his home. Two men have pleaded guilty in the probe, including a former aide to the congressman and a businessman who admitted paying bribes to the lawmaker.
FBI agents carried out a weekend search of Jefferson's congressional office in May, triggering criticism from congressional leaders who claimed agents had encroached on Congress's constitutional powers.
President George W. Bush intervened and ordered the seized material turned over to a Justice Department official not involved in the investigation. He ordered the material withheld for 45 days to allow time for discussion of ground rules for such searches.
The issue has left many lawmakers torn, and several Black lawmakers have appealed privately to Jefferson, who is Black, to step aside from the Ways and Means Committee voluntarily.
The chair of the Congressional Black Caucus, Rep. Melvin Watt, said after the vote that by taking the action they did, fellow Democrats chose "political expediency" or some other unacceptable factor over precedent. "Even at the end of the meeting we don't know what the standard has been," he said.
Watt said that constituents of some lawmakers will adopt the view that race was a factor in the decision. "I think there are people who will say that's the basis," he said. Blacks are among the Democrats' most loyal voters.
— The Associated Press