By Lisa Loving of The Skanner News
Published: 03 March 2011 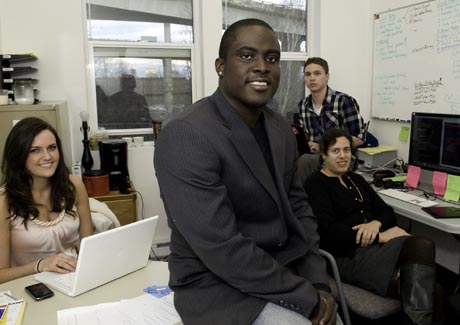 Portland-based uLynk — riding the wave of digital coupons, texting software and social media strategies for small businesses – is a blossoming startup that was galvanized by failure.

"What happened was we had a rental website where people could find housing and roommates for Oregon State University students, and we also sold directory advertising to businesses," said co-founder and marketing director Marques Alexander.

"One of my customers told me that we should integrate texting into our website because he thought it would be a good way to get people into the doors of his business."

So the students developed software to do that, folded it into their existing business, and entered their new company into an OSU business plan contest.

"We got our butts kicked," Alexander said. "And essentially what we did was, after that competition, it just motivated us to move forward with our concept."

Today uLynk operates a website where consumers can look through a directory of businesses in the Portland and Salem areas, enter in their cell phone numbers, and receive automated messages with discount coupons from their companies of choice.

The New York Times last year reported that mobile-coupon aggregators like Yowza, Groupon and Cellfire have been growing their user markets in the double-digits for the past two years; an estimated 45 million people used digital coupons in 2009, according to a study by Coupons.com, reversing a 10-year decline in use of coupons before 2008.

For business users, uLynk does more than shop digital ads around.

"Our company has perfected software that allows businesses to send out mass text message alerts about events, promotions, or just any type of instant information by text message," he said.

That's on top of the work they already do in web design and social media management.

"We help companies establish continuous relationships with their customers," he says. "That means there's public relations about their brand 24 hours a day, and instead of them having to stay on top of it, we'll take care of that aspect of their business."

For example, Iron Tribe is a re-entry organization in Portland that buys drug houses, refurbishes them, and moves in ex-offenders in recovery.

"They're using our texting service to stay in touch with their residents and let them know about their community service events," Alexander says.

The 2010 Haitian earthquake – and use of texting-based relief campaigns – threw a spotlight on the potential for cell phone activism using massive SMS networks.

A report last year in Philanthropy Journal showed that, among those who contributed more than $26 million worth of $10 text donations to the Red Cross within nine days of the disaster, the vast majority were recruited through cell phone awareness campaigns.

Companies like MobileActive.org and mGive are already working to target the estimated 90 percent of Americans who own mobile phones.

The combination of digital coupon software, business and nonprofit text message technology – put together with local shoe-leather in bringing small businesses into 21st century marketing – looks like a winner for uLynk.

The company's staff — Colin Landforce, 24, Jillian Burrows, 26, co-founder Alexander Neighbors, 29, and Brittany Warr, 23 – is in the perfect position to grow with the technology even as they relate to the struggles facing their customers.

"We're inspired by our clients who are running successful businesses in this down economy," Alexander says. "The good thing about losing the business plan competition was it taught us a lot about what you need to have a successful business."

Find out more at www.uLynk.com