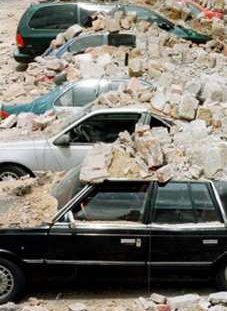 SEATTLE (AP) -- The biggest surprise about the Nisqually earthquake was that it wasn't worse.

Even a decade ago, scientists knew the Northwest was vulnerable to much nastier shakes than the magnitude 6.8 that rattled Seattle 10 years ago Monday. But what they've learned in the past 10 years really has some researchers spooked.

``It used to be, I never really thought much about it,'' said Oregon State University marine geologist Chris Goldfinger. ``Now I sit in my building -- the kind that pancakes in an earthquake -- and I'm thinking: I hope it doesn't go now.''

Goldfinger's studies suggest megaquakes of the type that devastated Sumatra and set off a deadly tsunami may jolt the Northwest much more often than previously thought. In the Puget Sound region, scientists have added more than 10 active faults to a list that numbered two in 2001. And new analyses show the ground under downtown Seattle isn't nearly as stable as folks used to think.

``The hazard has certainly gone up, but it's a reflection of our increased knowledge,'' said Brian Sherrod, a U.S. Geological Survey scientist stationed at the University of  Washington.

Technologies that reveal hidden faults and measure the scrunching of the Earth's crust down to the millimeter have propelled a decade of remarkable discovery in the Northwest. Old-fashioned fieldwork played a part, too. In their search for signs of earthquakes past, Sherrod and his colleagues dug so many trenches he's lost track of the tally. 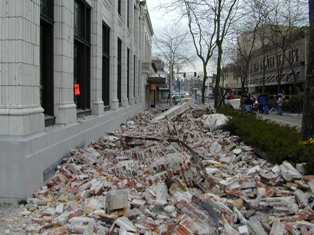 The new insights are beginning to inform construction and emergency planning, said Craig Weaver, the USGS' regional seismic-hazards chief. ``Ten years ago, we were in an exploratory phase. Now we have much more certainty about what we might expect to happen.''

That includes quakes of magnitude 6.5 to 7.5 on shallow faults that fracture the landscape from Olympia to the Canadian border. There's one aimed at the heart of Tacoma. Another skirts Olympia, and a third passes between Mukilteo and Edmonds. Some of the faults appear to cross the Cascade Mountains into Central Washington.

``We're astounded by the number of big faults we're dealing with,'' Weaver said.

Last week's New Zealand quake underscored the danger of shallow faults near cities. Even a relatively modest-sized quake can be deadly when the shaking is not dampened by distance or depth. Seattle's worst-case scenario is a magnitude 7+ on the Seattle Fault, the biggest of the two faults geologists had penciled in on their maps 10 years ago. Extending from Bainbridge Island to Bellevue, it passes under Safeco Field.

A repeat of the Seattle Fault's last big jolt 1,100 years ago would be among the most destructive in American history. And Sherrod and others now believe the Seattle Fault is dwarfed by a much larger fault zone called the Southern Whidbey Island Fault, which may have strands that extend from Vancouver Island to Richland.

The good news about the region's shallow faults is they don't pop very often, Sherrod said. Repeat times seem to range between 700 and several thousand years. The bad news is Sherrod and his colleagues keep finding more.

The key to unlocking the region's seismic past was the airborne laser scanner called LIDAR. The technique filters out vegetative cover and creates topographic maps that strip the landscape bare. Potential faults stand out like broken bones on an X-ray. ``That completely changed everything,'' Sherrod said.

On the coast, Goldfinger, too, is using novel approaches to better understand the cocked gun called the Cascadia Subduction Zone, source of some of the world's biggest earthquakes. The 600-mile-long offshore fault is the place where the ocean floor is being crammed under the continental plate. By the early 2000s, it was clear the fault could produce magnitude-9 earthquakes and tsunamis on a par with Sumatra's 2004 cataclysm. The most recent was in 1700.

By examining sediment cores for evidence of underwater landslides, Goldfinger pushed the record back to include 22 megaquakes over the past 10,000 years. More controversial is his claim the sediments also show big quakes on the section of the fault off the Oregon coast strike every 240 years, instead of the 400 to 500 years now factored into risk assessments. If true, that means there's a 37 percent chance the region will be rocked within the next 50 years.

Another bit of unsettling science suggests that instead of being tucked well offshore, Cascadia's danger zone -- the portion of the fault that would snap in an earthquake -- may be closer to Seattle, Portland and Vancouver, B.C., than previously thought.

The evidence comes from the study of the recently discovered phenomenon called ``silent earthquakes.'' Seismologists ``listening in'' on the Olympic Peninsula have detected tiny vibrations they believe are produced as the geologic plates in the subduction zone slip past each other. A network of more than 400 GPS stations across the Northwest is able to measure that slip, along with all the other tectonic wrenching that makes the region such fertile earthquake ground. A decade ago, there were only about a dozen of the stations, said Central Washington University geologist Tim Melbourne.

The slip measurements and seismic signals allow scientists to locate the portion of the subduction zone that's slipping freely, Melbourne explained. They use that information to estimate the location of the danger zone, the area where the fault is locked and building up tension that will be released with a bang.

Some experts remain unconvinced the danger zone lies within a scant 50 miles of the Interstate 5 corridor. ``The jury is out; but if it's true, it has to be taken seriously because of the implications,'' Goldfinger said.

The most likely quake to strike the Puget Sound region is another one like Nisqually. The USGS puts the probability at higher than 80 percent over the next 50 years. Similar to earthquakes in 1949 and 1965, the Nisqually originated more than 30 miles down, where the Juan de Fuca plate bends sharply as it dives under the continent.

Even though it wasn't exceptional, the 2001 quake provided some startling insights into what's likely to happen the next time the ground starts moving, said USGS scientist Art Frankel. Much of Seattle sits atop a basin, where shaking was twice as hard as expected during the 30-second Nisqually quake. Frankel and others had hypothesized the basin might trap and amplify vibrations in unexpected ways, and Nisqually proved it.

Frankel folded that knowledge into a state-of-the-art computer model he worked on for more than 10 years. Factoring in what's known about the region's subsurface geology, the recently discovered faults and the possible range of earthquake types, he ran more than 500 scenarios through the computer. To validate the model, he compared simulated outcomes against measurements from past quakes.

The result is the nation's most sophisticated seismic-hazard map. The map identifies vulnerable areas -- including the basins beneath Seattle, Tacoma and Everett -- and it predicts the expected level of shaking.

``We don't have to wait until the big earthquake occurs to know where the bad places are,'' Frankel said.

The modeling hasn't been factored into building codes -- but Frankel hopes it will be.

``It's on the edge between research and application.''

Frankel already is working on an updated hazard map. He's also tackling the region's biggest seismic question mark: How long and hard will the ground shake during a magnitude-9 subduction-zone quake? The answer is vital to understanding how the tall buildings in Seattle, Portland and Vancouver, B.C., will weather the ride. Several modern high-rises in Chile built to stringent codes were hammered in last year's magnitude-8.8 quake on an offshore fault very similar to Cascadia.

``A big subduction-zone quake will be pretty bad,'' Frankel said. ``We're trying to figure out how bad.''