By Lisa Loving of The Skanner News
Published: 17 February 2011 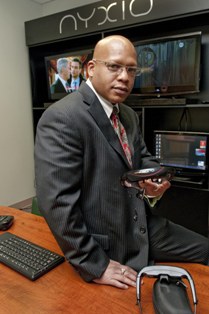 Here you can test the company's flagship product, the big-screen VioSphere, which combines an HDTV with a personal computer and Windows Media Center Edition technology –meaning you can surf the web, play DVDs, stream music and Skype your mom in Chicago. And then you just might decide to watch your favorite TV show.

Engineer Giorgio Johnson, founder and CEO of Nyxio, is a native Portlander whose education and work experience has translated into the perfect mix of design, development and production of forward-thinking media hardware.

"This is a Portland company, it's an Oregon company," he says. "What we do here could put us on the map in regards to what we do in home entertainment and technology."

Johnson – who has lived all over Asia and Europe — got his mechanics training at Portland State University. His first job out of college was testing electronics at a factory in Singapore.

After a few years of perfecting other peoples' electronics, he struck out on his own, selling televisions and moving into hardware design. Johnson's interests have also led him to run an eyeglasses company and an entertainment management business.

The Omega Windows 7 tablet PC and the smaller Edge are fully-functioning computers with wi-fi, webcam and High-Definition Multimedia Interface. The products are both touch screen and wireless, and soon will have 3G capacity.

You can connect a wireless antenna into the Omega and watch TV on it as well.

One of the things that favors the Omega over the iPad is that you can watch any website on the Omega.

"There's no restriction, so, with the iPad you can't watch all flash sites — you can't go on Hulu," he says. "But with ours you can watch any of that because it's Windows 7, full blown."

Johnson says he's working on roll-up keyboards for people who want to set up a full mobile office, although it also operates with a built-in touch-screen keyboard.

If you love settling in front of your big-screen television, guess what: Here come the smart TVs.

"A smart television does much more than a regular television, it doesn't matter about the inputs, it's what's inside," Johnson says. "You can use my VioSphere as a server, you can control your home with it.

"I could connect to this TV with my phone, and actually look at you standing there, no kidding," he says.

"We take what's existing and just integrate it or make it better."

But the really mouthwatering item, if a recent visit by the Skanner News staff is any indication, is the Venture Mobile Media Viewer, which builds on existing MMV technology with bigger media file storage, and a non-radiation LCD panel with 62-inch, 16:9 wide screen display.

"Wirelessly, you don't need any connection to anything but, if you had a gaming system, and you wanted to watch it on a bigger screen, you put on our glasses that have a virtual screen that looks like you're sitting about ten feet back in a movie theatre," he says.

Ultimately, Johnson wants Nyxio to become a television manufacturing company that builds its products in America, but for now it's too expensive to build all of the hardware here.

Find out more at www.Nyxio.com.