A celebration of the life of local musician Barry Hampton will be held at 9 p.m. on Wednesday, Feb. 9 at Backspace, 115 NW 5th Ave. Hampton, a musician and singer for multiple local bands, died on Feb. 4, 2011. He was 42. Details will be published as they are made available. 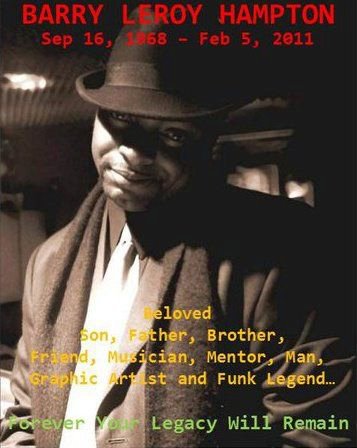 Organizers of the celebration are asking singers, poets, musicians, family and friends who knew Hampton to come and celebrate his life with food and song. Attendees will be encouraged to share stories, photos, perform and bring food to share. His daughters will be in town as well.

Barry Leroy Hampton was born on Sept. 16, 1968. He was a member of Barry Hampton and the Triple Grip, The Clampdown, an original member of the Black Key and was curriculum creator at REAL Prep Charter Academy.

According to the obituary: Barry was born on Sept. 16, 1968 to Barry Hampton, Sr. and Odessa Hampton in Baltimore, Maryland.  He was raised in Baltimore and moved to Oregon in 1997.  He enjoyed cooking, playing with his girls and creating art.  He married Sydney Lytle and the couple spent 10 wonderful years together; he is loved and laid to rest by companion Erica Jay.

There will be a funeral in Baltimore, Md. on Tuesday Feb. 15.  For memorial contributions, please contact: [email protected].  Arrangements by Crown Memorial Center, Tualatin.