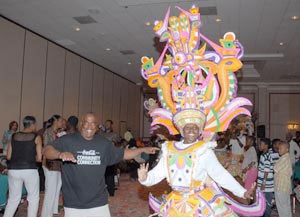 ATLANTA—Coca-Cola Co. took its observance of Black History international with a celebration in Nassau, Bahamas.
Recently, more than 60 Coca-Cola consumer sweepstakes winners and guests from across the country participated in a one-of-a kind historical adventure during the company's Journey to Bahamas.
For the fifth anniversary of the tour, a new component was added to the trip. Coca-Cola invited genealogist Rick Kittles, Ph.D., co-founder of the Washington, D.C.-based African Ancestry Inc. to analyze the DNA of several prominent Bahamians and reveal the results during the tour.
This component was an extension of Coca-Cola's sponsorship of "African American Lives," an educational series that aired on PBS during February to celebrate Black History Month.
"Coca-Cola was pleased to add the genealogy component to this year's Black History Tour," said Doug Coffed, vice president, Coca-Cola North America. "It is our hope that this project opened dialogue and inspired our consumer winners and others to connect with their individual ancestries."
"African American Lives" traced the genealogy of prominent African Americans. It featured researchers, historians and DNA scientists who retraced the ancestral origins of several influential African Americans in reverse chronological order through America and back into Africa.
A similar process was used to document the experience of several leading Bahamians who agreed to participate in the project. Participants included Romauld S.E. Ferreira, a Bahamian media personality and attorney; Judy Monroe, president of the Coca-Cola Bottling Co. of the Bahamas; Paul Cecil Aranha, a White Bahamian whose great-great-grandmother was an African slave; and Norma Angela Allen, a retired medical technician and former director of the Nassau Blood Bank.
Results of the DNA analysis were revealed at St. Peter's Native Baptist Church in historical Gambier Village. Gambier Village is the oldest community settlement in the Bahamas, inhabited by freed slaves from Gambia, Africa since the early 1800s. As a keepsake, Coca-Cola installed a new sign to replace the original weather-worn entrance way that welcomes visitors to the village. The company also donated educational supplies to the 60-year-old elementary school.
Other than Gambier Village, tour sites of the historical adventure included: Fort Charlotte, built in the 1800s by slaves in honor of the consort of King George III of England (pirates temporarily housed shackled slaves in an underground dungeon at the fort); St. Matthews Church, the Anglican church built by slaves; the Queen's Staircase, a 102-foot limestone staircase that was also built by slaves; and numerous government buildings.