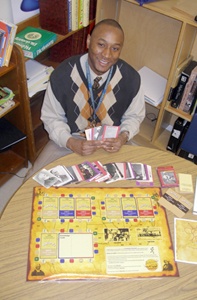 The official launch will start at 6 p.m. on Feb. 26 at Champions Barbershop, 3827 NE Martin Luther King Blvd. featuring an unveiling of the game, musical performances and a speech by Melissa Hibbert.

Crews says the album was made especially for the Journey to Freedom game as another way to engage youth in their education. The album features "conscious hip hop" and several songs written specifically for the game.

The project will also be holding movie nights every Thursday during February, with screenings of "Night John," and "Panthers." "Panthers" will screen at 7 p.m. Feb. 10 at the Portland State University Multicultural Center. Night John will screen at 7 p.m. Feb. 3 and Feb. 17 at the PSU Multicultural Center, and Feb. 22 at Pix Patisserie on 3901 N. Williams Ave.

On Friday Feb. 5, Crews will hold the Inaugural Black Male Summit Breakfast with guest speakers Dead Prez and Rodney E. Ferguson, CEO of Spirit Mountain. The summit will be held from 9 a.m. to 1 p.m. at the Umoja Center, 4941 NE 17th Ave. in Portland. An RSVP is required by emailing [email protected].

Crews encourages young and old alike to attend the breakfast, which attempts to bring men together to be informed about the Journey to Freedom Project's curriculum and to try to engage men to become mentees to the younger generation. 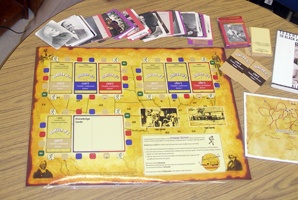 Crews' Journey to Freedom engages students to learn history and literacy in a different way than the traditional classroom experience. Playing an enslaved South Carolina man, students must increase their knowledge of the English language and Black history in order to buy their way to freedom. The game was inspired by the novel "Night John."

Crews has been using the game to positive results in Jefferson High School and now at his new home in Vernon Elementary for his 5th grade classes.

"I can see it in the kids' attitudes," he said. "We want to change kids' perspectives to see education as self-education. You don't have to rely on a school or a system."

He says he's gotten three other teachers signed up to use the game in Portland and one in Los Angeles.

Crews describes the game as more of a curriculum than a game. Unlike a traditional board game – with exceptions for unending classics like Monopoly or Risk – Journey to Freedom takes much longer than an afternoon to complete.

Crews is currently hosting several book clubs -- called "Readers to Leaders" -- two at Vernon and one at Jefferson. They've currently read "Night John" by Gary Paulsen and "Handbook for Boys" by Walter Dean Myers. One of the main goals of the Journey to Freedom Project is to turn "reluctant readers into motivated readers." He says he's in the process of developing a "text lineage" – a series of books he'd like for his students to read as they make their way from 5th grade through high school.

For more information, visit www.journeytofreedomproject.org – where the online version of his game will soon be available.

For previous coverage of the Journey to Freedom Project and Foundation, click here