Foxworth Is Demoted, Assigned to Southeast

Former Portland police chief Derrick Foxworth will begin a new job as commander of the Southeast Precinct on July 1.
Foxworth has been on paid administrative leave for three months while under investigation for sexual harassment complaints.
Interim Police Chief Rosie Sizer announced the changes Tuesday, among 10 other command changes. The re-assignment, in fact, represents a promotion for Foxworth, who had been demoted to captain last week by Mayor Tom Potter. The demotion was the result of the findings from the investigation, which cleared him of seven of eight claims. The only accusation substantiated was that 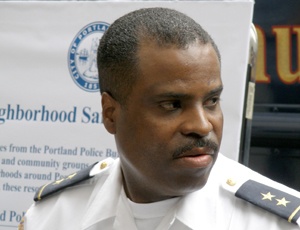 Foxworth sent an e-mail containing a rumor about an internal investigation.
Other accusations made by Angela Oswalt, a desk clerk with whom Foxworth had had an 18-month relationship before he became police chief, included sexual harassment, creating a hostile work environment, abuse of power, retaliation, favoritism, use of alcohol on the job and discourteous treatment and were unsubstantiated.

However, the 40-page investigative report noted that Foxworth, as a commander at the time of the relationship, exhibited a "serious lapse of judgment" when he sent explicitly sexual e-mails to Oswalt. The e-mails were written on Foxworth's personal computer when he wasn't on duty.
A police directive requires members of the bureau, whether on or off duty, to practice "reasonable rules of good conduct and behavior" and they "shall not commit any act tending to bring reproach or discredit upon the bureau or the city."
In announcing Tuesday's command changes, Sizer acknowledged in an internal memo that the police bureau had been through a "tumultuous time."
"It is time to move forward and I want you to know that I have spent considerable time looking at what's best for the organization and have made command assignments accordingly."
Although Potter had demoted Foxworth to captain last week, he didn't object to Sizer's decision. In effect, Foxworth and Sizer have traded jobs; before Potter appointed her as interim chief, Sizer was commander of the Southeast Precinct, which is Portland's second-largest precinct.
When he announced his decision to permanently remove Foxworth as police chief, Potter said Foxworth's ability to lead the police bureau effectively as chief had been damaged.
"Without trust, no police officer — especially not the chief of police — can do all that we demand of him," Potter said.
A former Portland police chief himself, Potter noted that the relationship between Foxworth and Oswalt was private and consensual, but Potter said, it had nevertheless become part of the public consciousness. 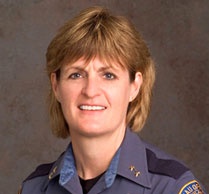 "Men and women of the Portland Police Bureau and members of the public look to their chief to set the tone for acceptable conduct. I do not believe Chief Foxworth's example meets the standards that I, as the police commissioner, expect of the chief of police," Potter said.

The mayor asked Yvonne Deckard, director of the city's Bureau of Human Resources, to review city policies governing workplace relationships. Such relationships are not currently against city policy. He also asked Deckard to examine police bureau policies covering internal communications.
Following Potter's announcement, Foxworth, who had been prohibited from responding to the allegations until the investigation concluded, said he disagreed with the finding that he had violated a police bureau directive against sharing a personal opinion about an ongoing investigation.
He also said that "relationships between fellow police bureau employees are common and do not violate any city policies … . They have not resulted in and do not lead to discipline, except, as in this instance, where there has been what the mayor described as a 'media frenzy.' "
The police union representing Oswalt issued a statement saying it was surprised that "the city of Portland would continue to employ a person in a high management position who is clearly 'guilty' of profoundly poor professional judgment. We are concerned that, even given his stiff demotion, Derrick Foxworth will continue to be in a position of authority over female workers. We urge the city to closely monitor his supervisory activities in the future."
The three-month investigation included interviews with 22 witnesses and dozens of documents, e-mails and phone records. Following the internal process, the work was reviewed by an independent consultant, who searched for any bias. Investigators focused on eight issues, including whether Foxworth's actions constituted sexual harassment,  violation of city policies, misuse of city resources and abused of power.