Ballers of the New School: Author to Speak in Portland Jan. 29 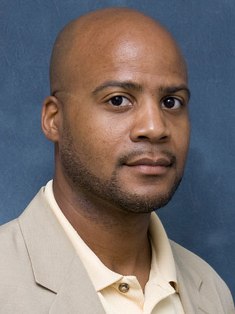 Images of successful African American athletes inspire the dreams of millions of young Black men. That matters in a culture where athletes are viewed as demigods, yet positive images of Black masculinity are hard to find. Author Thabiti Lewis takes a hard look at sport, racism and images of Black masculinity in his groundbreaking new book 'Ballers of the New School: Race, Sports and American Culture.' A professor at Washington State University, Vancouver, Lewis has a full schedule that includes talking to young men and women in cities across the country about masculinity, sport and race. Teens are especially welcome at this event.
Lewis will speak at 2 pm Saturday, Jan. 29 at Reflections book store, 446 NE Killingsworth St., Portland. The Skanner interviewed Lewis by phone Jan. 25.

The Skanner: In your book, you write a letter. What's that about?
Thabiti Lewis: I write a letter to my cousin, who is turning 16. I had a call from my aunt who was a bit distraught. Previously he had been an honor student, but his grades had slipped. He'd decided that sport was going to be his route to a profession. So I wrote this letter for him and for all the other young people of all backgrounds. And I should also say that right now, today, he is finishing his last semester of his Masters degree in Engineering. 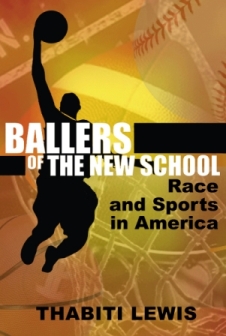 The Skanner: What do you want to tell Black teens?
Thabiti Lewis: I want to tell them that I understand the pressures they are under. That they are grappling with what it means to be an African American male, to be a male in America and dealing with the fact that it is not that cool to be smart, but it is really cool to be a jock. There's so much coming at you. So I'm just saying: Don't forget you can be involved in this in what I call 'the sweat free zone' – which is administrative, management, ownership, sales or writing about sports.
So what does it mean to be male, but also a "baller" someone who's living life in a certain way and they're in control. And to really be a baller, is to be a person who has political consciousness, who is intelligent and is a Renaissance person. Those people are really positioned to have really have their voice heard and to make an impact.

The Skanner: Your book is taking a hard look at how race and masculinity and sports impact African American men and women.
Thabiti Lewis: The book is about race and sports in American culture, so it is a vehicle to engage in a conversation about the nature of race progress. It explores what is valued in American culture, and looks at our notions of masculinity, particularly Black masculinity as reflected in sports. I look at some true and false ideas we have: the notion of sport and that upward mobility narrative that too many young folks see as their best opportunity. I pull the covers off that.
I'm saying, let's realize that's a long shot. I'm also saying you have a better chance of becoming an English professor, a physician, a nurse or a lawyer than you do of becoming a professional athlete because it's such a minute pool of individuals who make it to that level.

The Skanner: 'Ballers' questions a lot of what we accept without much thought?
Thabiti Lewis: Yes. How are people of color represented in sports culture? How are women represented? What does that say? Are they in positions of leadership, power? What does that show us? So that's what I try and do.
I try to offer solutions as well. Because there is a movement to change these things – to change these images, to change how intellectuals are seen. 'Ballers of the New School" is really about a movement to address these things.
So what I'm also doing in the book is examining how racial images can be good and how they are cast in negative ways in contemporary society. And we have do some control over this. We can change that by spinning different narratives. My projection is optimistic. How can we use sport to really take us toward the post-racial society that we would like to see? To do that we have to get past – we have to get post-racism and here's how we do that. And then we can be post-racial

The Skanner: Where did you grow up and how did you begin thinking about how our culture views Black men?
Thabiti Lewis: I'm from St. Louis Missouri. I was writing a column there while I was at university, but once I finished my doctorate I began to think about putting the things I'd been writing about into the book. I'm lucky. I was a good athlete, so I was socially accepted and it was permissible for me to be a pretty good student and show my intellectual ability. So I have been there. I went to a high school that had the worst football team so I refused to play because I had standards. I am very honest about my own experience in the book. The only way to look forward is to be honest.

The Skanner: You have two daughters, so you are having to practice on other people's sons. You are welcome to work with mine.
Thabiti Lewis: I'm trying to clear the social landscape so that they are dealing with young men who are confident and unwed to notions of patriarchy. How about that? (Laughs.) Can't raise them to be different sorts of women, and face men who aren't prepared or ready for such women.

If you miss Dr Lewis at Reflections, you can also see him speak at noon March 1, in the library at Washington State University, Vancouver.