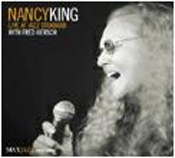 Sometimes jazz duos work out OK, and sometimes they don't work in the slightest way.
This duo recording by singer Nancy King and pianist Fred Hersh sets the standard for vocal and piano twosomes. The duo format allows King's voice to shine forth, soaring and dipping unimpeded by the sound of other instruments.

Her forte is her scatting. She seemingly has an inexhaustible supply of fresh horn like ideas and she uses them in a delightful manner unlike any other singer. Some have compared her to Betty Carter, but the comparison ends with the fact that they both scat. I find King doesn't engage in the Carter-like word distortion in her scatting and is never abrasive.

The pianist, Fred Hersh, was running a series of events at Jazz Standard and had never met King but was a devotee from listening to her recordings. He invited her to New York and the club date that he, unbeknownst to King, had arranged to be recorded.

The result is a golden feather in the caps of both. Some of the tunes include: "There's a Small Hotel," "I Fall in Love TooEasily,""Ain't Misbehavin'," "Autumn in New York," "There Will Never be Another You" and more. 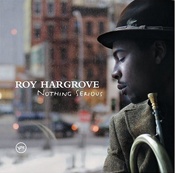 Personally, I have waited for a Roy Hargrove Quintet record for years, through several editions of Hargrove groups.
"Nothing Serious" is well worth the wait. The veteran Ronnie Matthews is on piano; and Dwayne Burno, bass; alto saxophonist Justin Robinson; drummer Willie Jones III; and special guest, trombonist Slide Hampton, are a great fit with Hargrove's trumpet and flugelhorn.

His flugelhorn comes into play on his own composition, "Trust," a somber but pretty ballad. Burno adds his own touch between Hargrove's two solos, helping make the kind of tune that never wears out. "Camaraderie" is aptly named, with Hargrove leading off, followed by Robinson and then Matthews with Hargrove returning to anchor this music sprint relay.
Hargrove's tone is impeccable, whether on trumpet or flugelhorn. 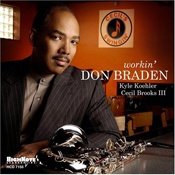 It's hard to beat a live recording in front of an enthusiastic audience.

There is a magic created between the musicians on stage and the audience out front. The music inspires an audience reaction and that reaction, in most cases, urges the musicians to even greater heights of performance.

West Orange, N.J.'s Cecil's Jazz Club was the scene of just that kind of jazz interaction when tenorman Don Braden recorded this trio record there in June 2005. It's a fine trio, too, with organist Kyle Koehler and drummer Cecil Brooks III.
Two of the 11 tracks feature Braden unaccompanied. The first is a pretty tune resembling a bird in flight titled "Looking for Her." It leads directly into "She's on Her Way," a beautiful love ballad. The second is "Moving In," another gorgeous offering that leads into "The Closer I Get to You," a most gentle, caressing tune. Koehler's organ solo continues to massage the soul.

There is plenty of fire, too, with tunes like "Vail Jumping," You Can't Hide Love" and "Where There's Smoke." 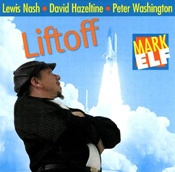 Guitarist Mark Elf gathered a fine crew of musicians together and recorded an excellent definition of his art.

He begins with the almost-too-brief title tune, "Liftoff," a nice get-acquainted up-tempo piece. What follows is one of the most gorgeous guitar selections you could want, "Thanks For the Memory."