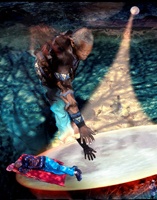 Photojournalist Janis Miglavs will uncover legends from Africa in an audio-visual presentation showing illustrations from his project "In Search of Africa's Undiscovered Myths."

Co-hosted by the university's Department of Black Studies, the evening will feature the oral stories, legends, myths and dreams of remote indigenous African tribes as recorded by Miglavs.

The evening also will include African cuisine and music, a silent auction, an audio-visual presentation and a gallery of illustrations.

Proceeds from the benefit will support Miglavs' mission to preserve indigenous remote cultures and assist with further research for his book that will feature contributions from Alice Walker, author of The Color Purple.

The"undiscovered myths" project is a passion for Miglavs, who has trekked into the most remote corners of Africa to study with indigenous tribal elders, chiefs, storytellers and shamans. Miglavs found oral stories that anthropologists say no one else has ever recorded. In addition to recording the storytellers'detailed descriptions, Miglavs created photo illustrations of the myths and personal dreams of these tribes.

When the last elder of an indigenous tribe dies, he carries with him the last spoken words of his language, the last strings to his tribe's wisdom. What are we losing? That is the question that inspired Miglavs.

Miglavs' mythical journeys have allowed him to focus on two projects. These include a book that will provide an educational resource and allow others to see the inner world of endangered indigenous tribes and preserve cultural wisdom.

Thesecondproject includes further research that will expand the study of myths and dreams of 43 additional remote indigenous tribes throughout the world. By comparing these myths and dreams, Miglavs wants to track the migration of modern man from his birthplace in Africa.

Miglavs' photographs have been displayed in numerous galleriesincludingthe United Nations in June 2005.